How to tell the difference between male and female foxes 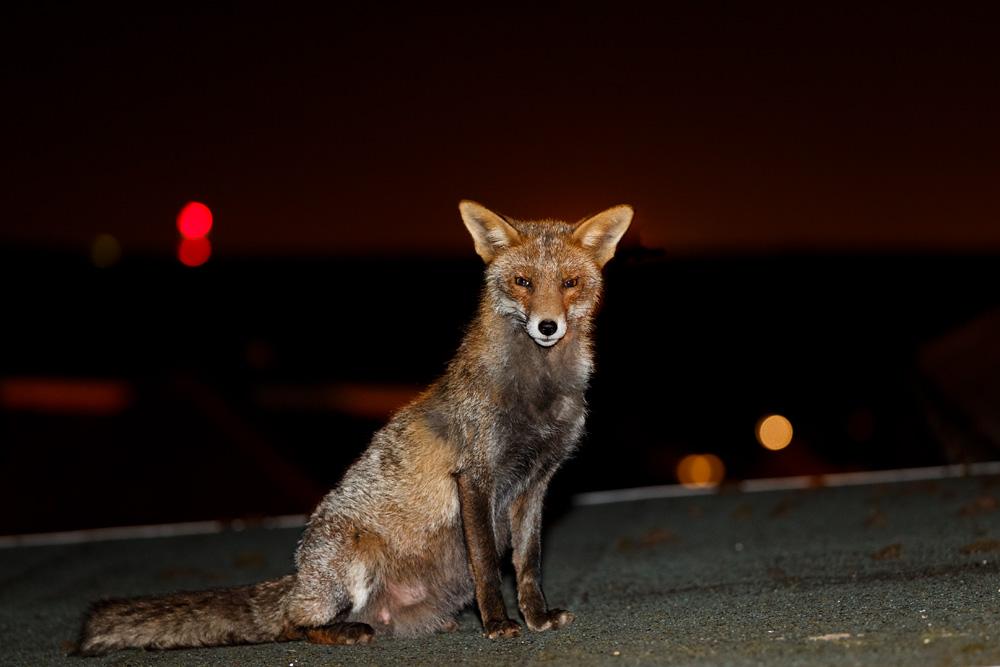 For the past few months I have been referring to Wolfy as male, but as the above picture confirms Wolfy is most definitely female. Ouch! That’s a poor mistake for me to make, but it got me thinking about how we identify the sex of a wild fox. Often it is very obvious, but not always. This blog explores why I think I leapt to an incorrect conclusion and looks at some of the ways that wild foxes can be sexed.

Looking at the above picture of Wolfy, her teats are clearly evident on her lower trunk. This is one of the most obvious signs of a vixen and is even more unmistakable when the vixen is nursing young. See the next image of a previous vixen taken when she was nursing young cubs. 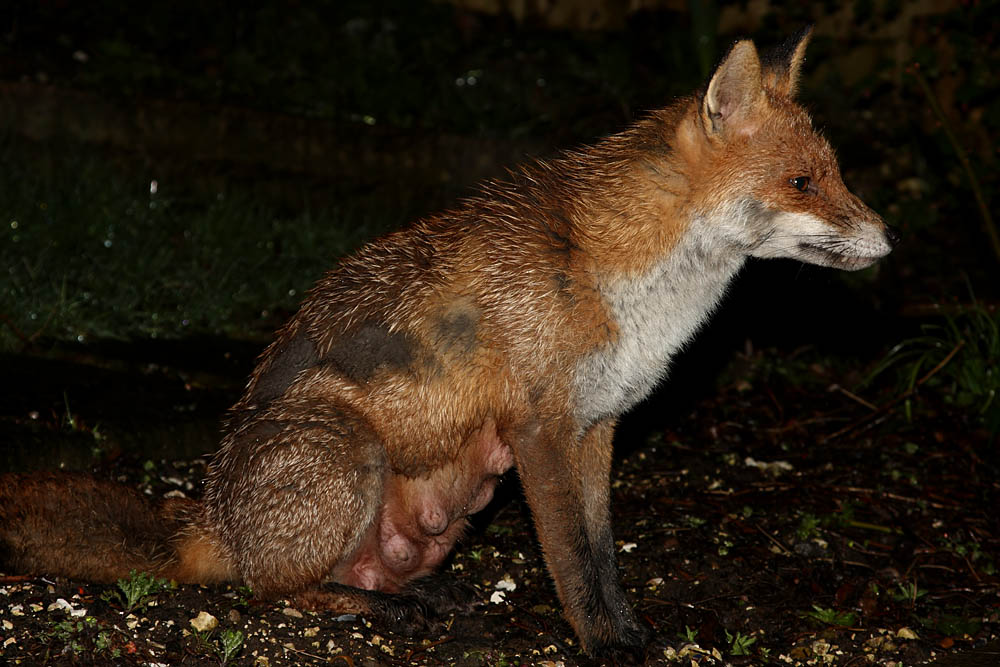 Identifying male foxes can also be easy, as in this next photo. Of course, they don’t always present themselves quite so explicitly. It’s very easy when the penis is protruding, but often all you will see is a small circle of fur in that area. 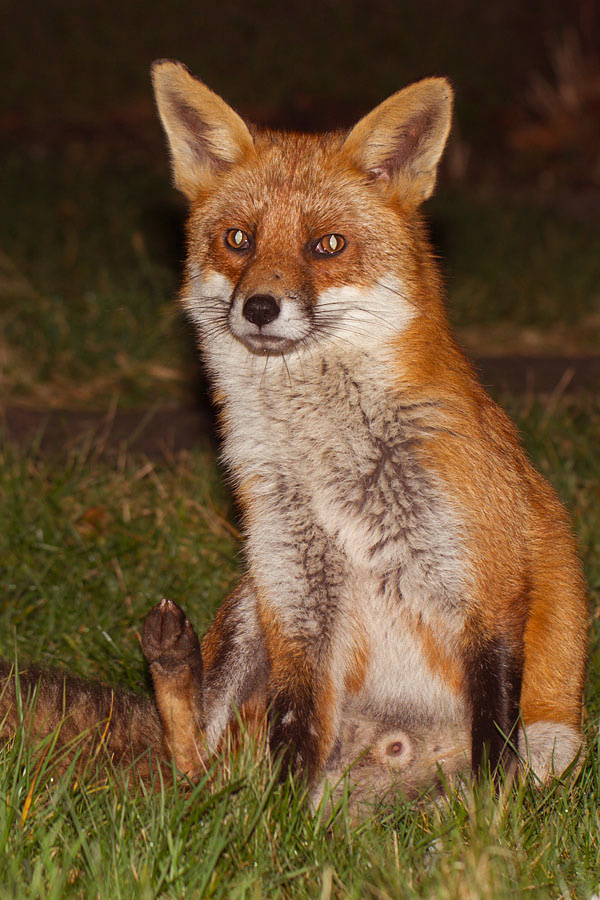 Dog Fox – this photo is from a few years ago of a male (dog) fox.

This next photo (taken some years ago) is of a male (‘dog’) fox in heavy moult (and possible slight mange); but it also shows the fox’s testicles (which are carried relatively high). 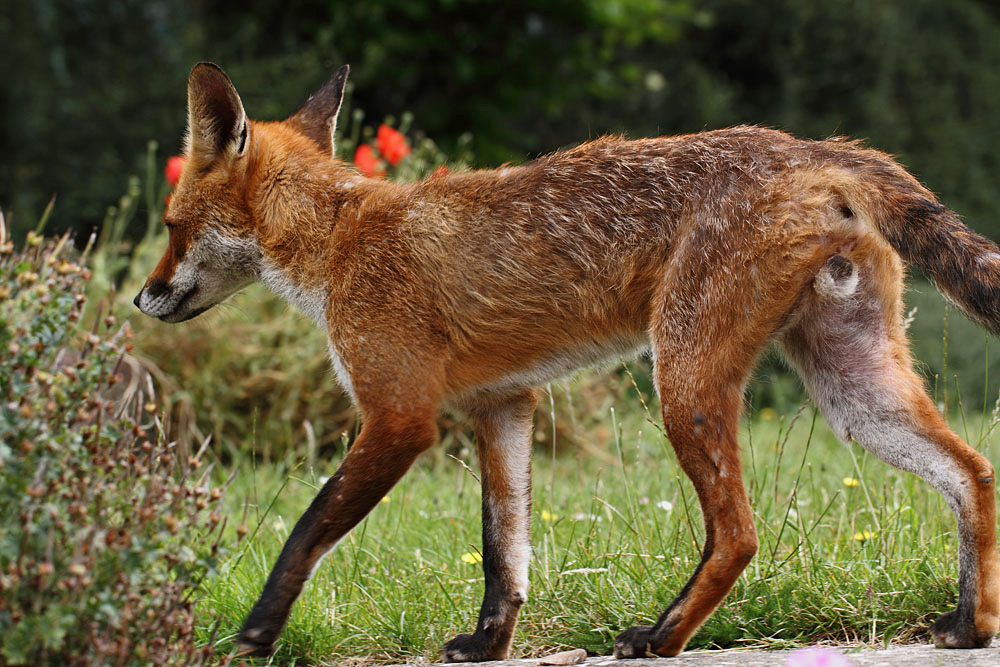 My assumption that Wolfy was male was based primarily on the identification of ‘him’ as ‘male’ as a young cub, having seen him present himself (penis extruding) very much as in the previous picture. That and some aspects of his friendly behaviour. Of the 5 cubs we saw over the summer, two were noticeably darker than the others. Wolfy was one of them, a bit of a loner with a preference for the front corner of the garden. He was a more regular visitor than the second darker fox.

Autumn brings behavioural changes as the adult foxes reassert their territorial claims. Young foxes are driven off to fend for themselves. For a short while we barely saw any cubs. Thus, when a familiar young fox, with a dark coat, reappeared in November I assumed it was Wolfy. 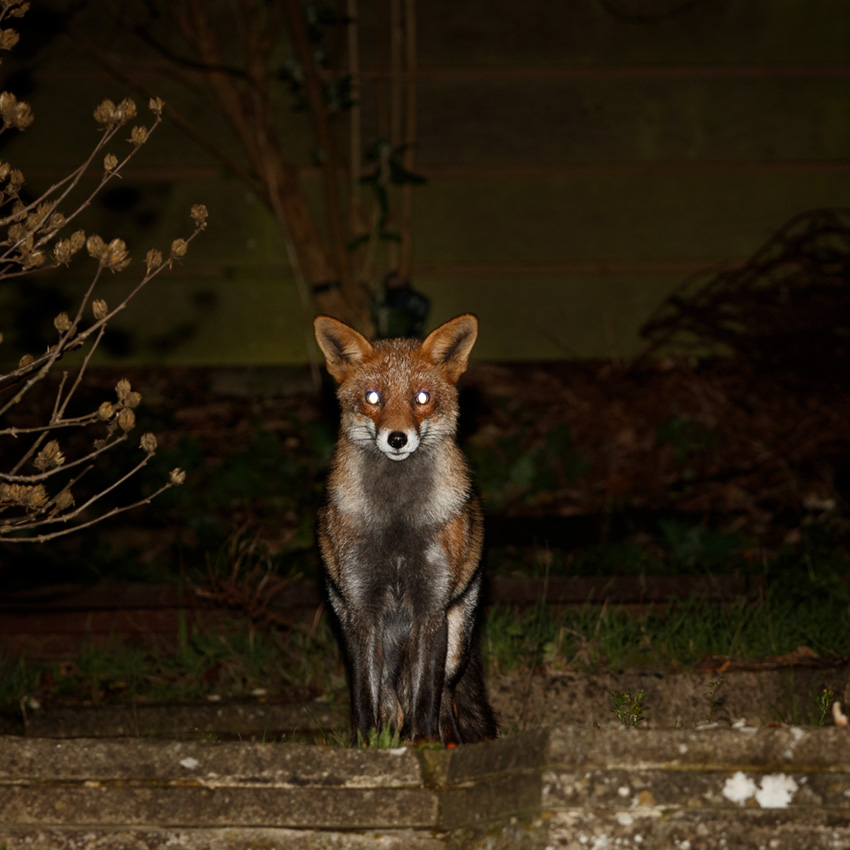 I missed some (obvious) clues that it wasn’t him (i.e. the male cub from the summer).

Firstly, during the annual dispersal of cubs a young male fox is much more likely than a female to be driven off from the birth territory. While males nearly always disperse, it is relatively common for a first year female to remain with the home group even if she doesn’t breed. She will act as a helper vixen to the primary vixen much as Pretty – a 2017 female cub – did last year. So that was a big behavioural clue and I should have paid much more heed to it. Bluntly a mature male would not allow a young male to remain on his turf. And if a young fox remains she is almost certainly female.

There are also some other physiological clues. Males tend to have broader heads (and may be larger overall). This is more obvious with mature adults but heavy winter coats can disguise this to an extent (much as the winter coat will mask the more obvious sex characteristics). A broad head indicates a male, much as a narrow head indicates a female. 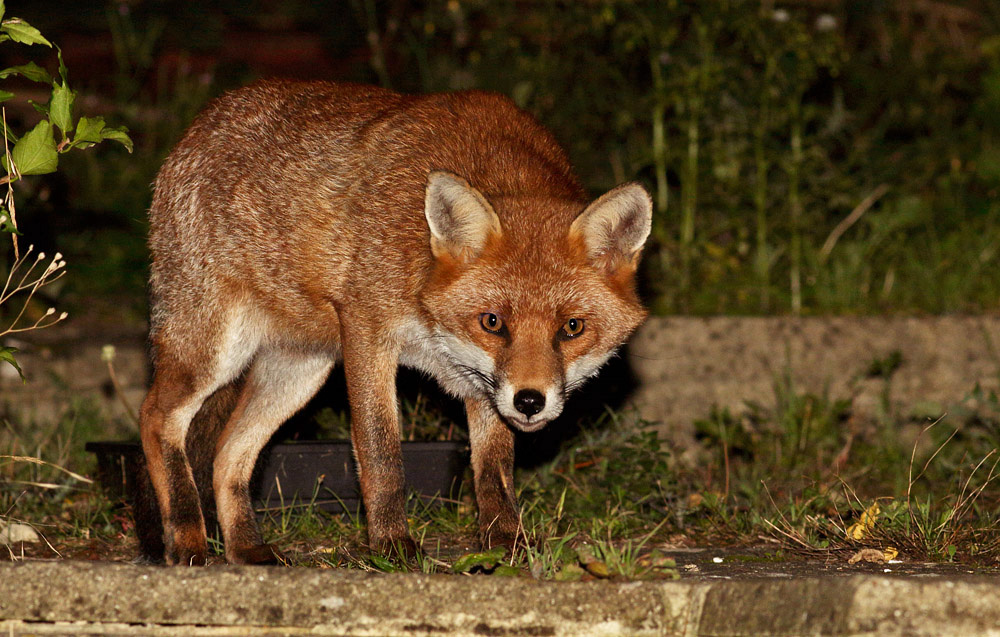 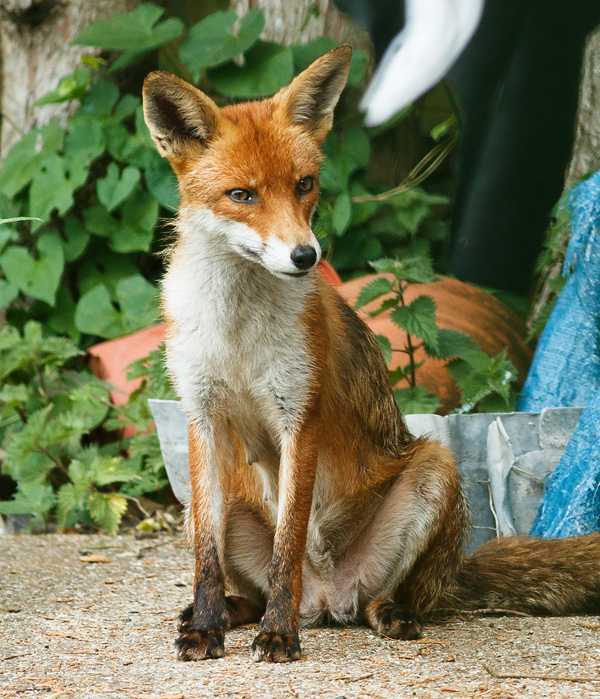 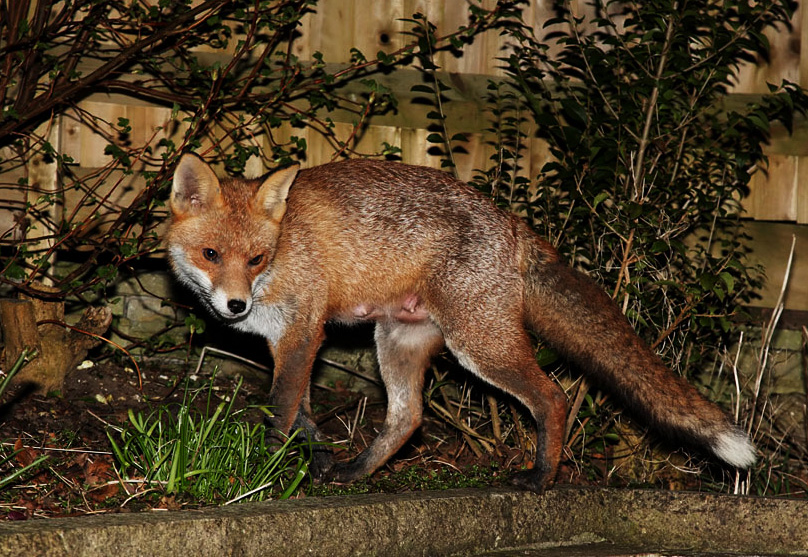 The Bold Vixen from a few years ago had a relatively broad face so head shape in isolation can be tricky.

With juveniles, head shape is less helpful as they are still growing. Foxes are not fully developed until over a year old (they tend to gain muscle and weight). The heavy winter coat can also be deceptive as the fur broadens their overall shape. These are excuses, but Wolfy is small, and her head has remained ‘narrow’. This is more obvious as she approaches her first birthday.

The biggest clue, however was this next video clip and I missed it entirely. It was captured in November and is definitely Wolfy.

Although I hear fox calls all the time I have very rarely witnessed them, and didn’t appreciate the significance of this call until I came across an excellent video by Professor Dawn Scott (produced for the Fox Guardians site). Wolfy is making the vixen’s call for mating partners.

I’ll sign off with a couple more pictures of Wolfy. And hopefully this will teach me to be more observant of all the signs. 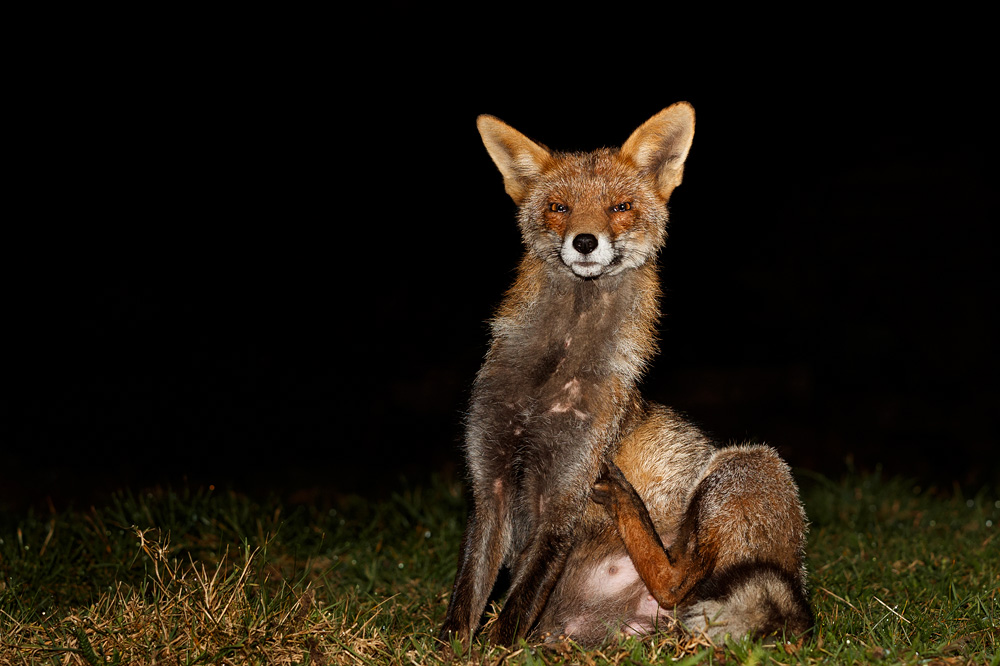 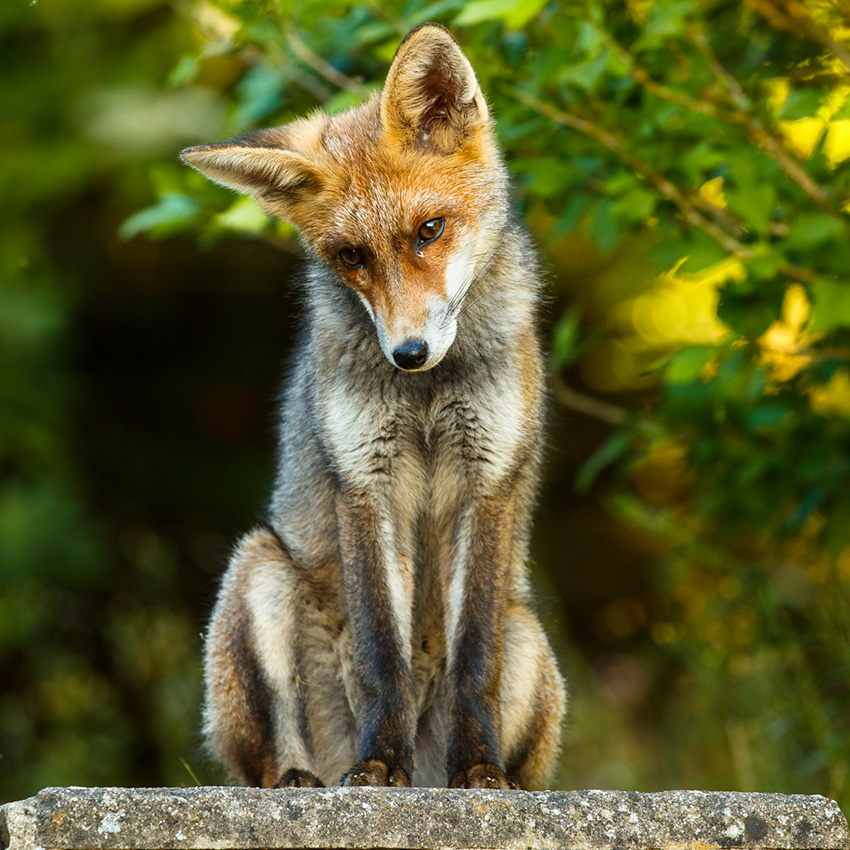 Postscript: for a more scientific article on this topic visit the excellent Wildlife Online site.

Dreadful pun in the title aside, this is a short sequence taken this afternoon when I was testing out my new 24-70mm lens. The subject is the little vixen we call’ Pretty’ (because she is). She’s quite bold, and has been one of the more consistent of the cubs over the past few months. Pretty is also quite fond of apples. 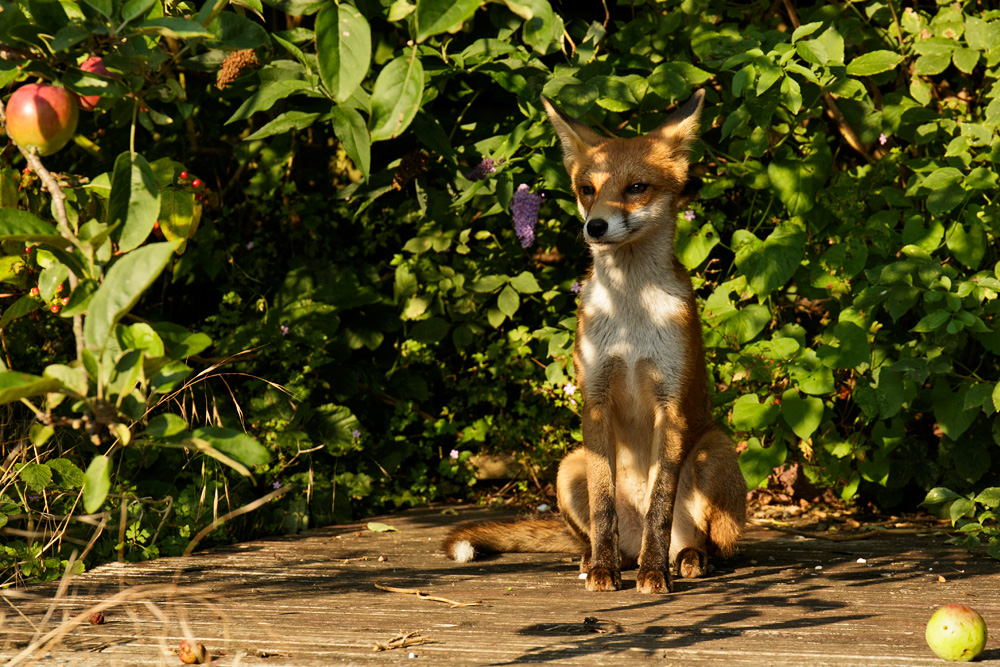 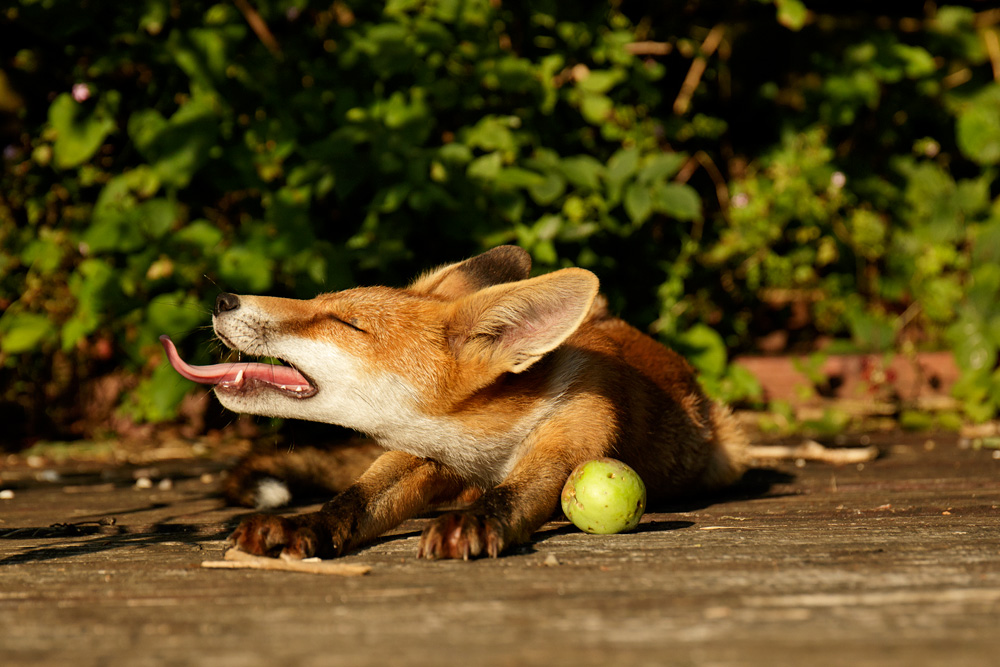 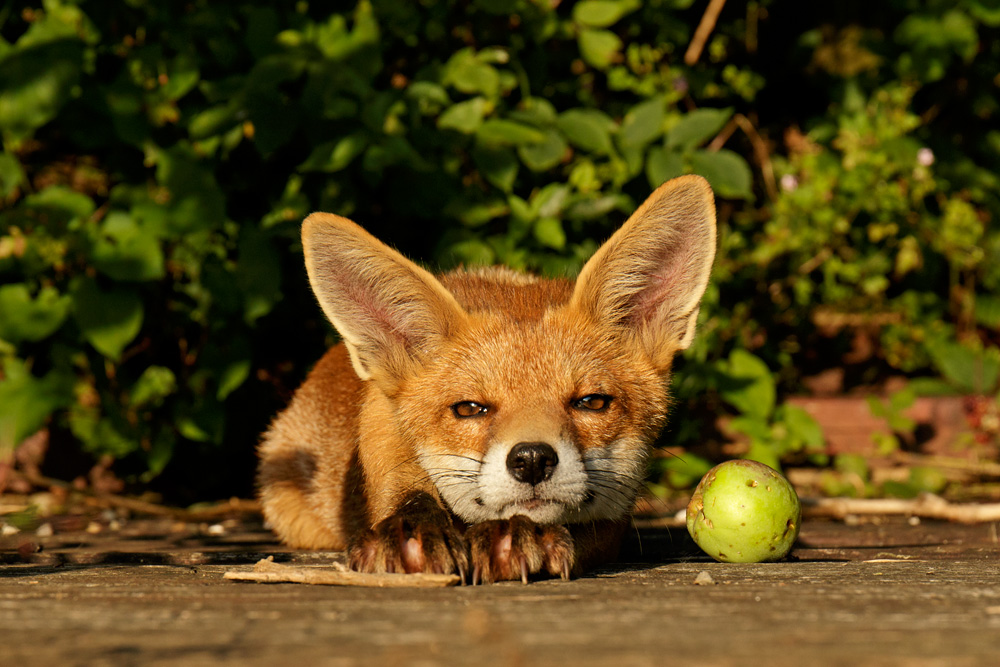 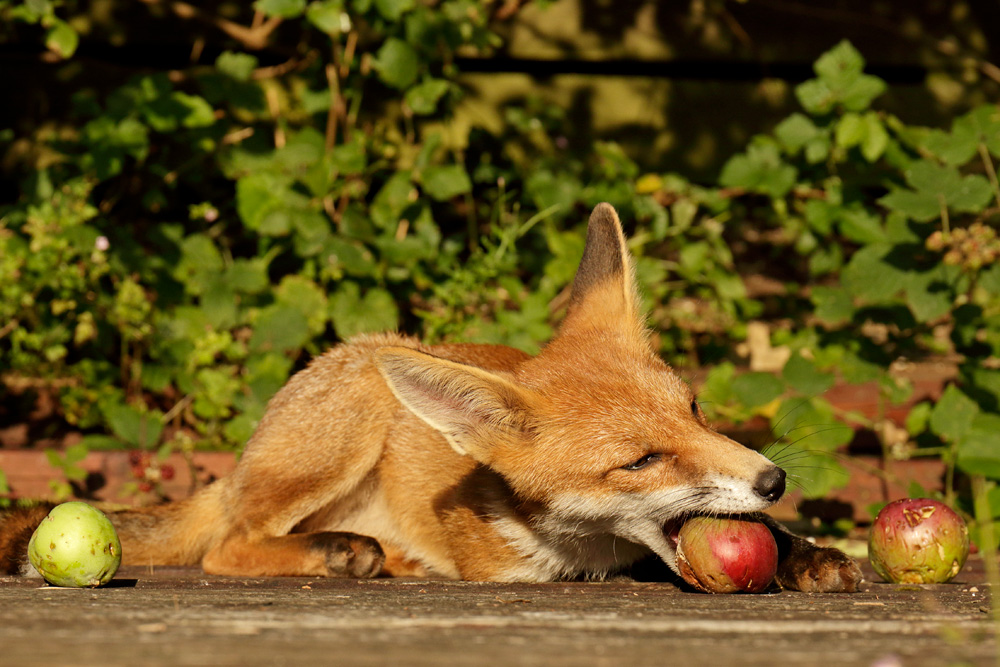 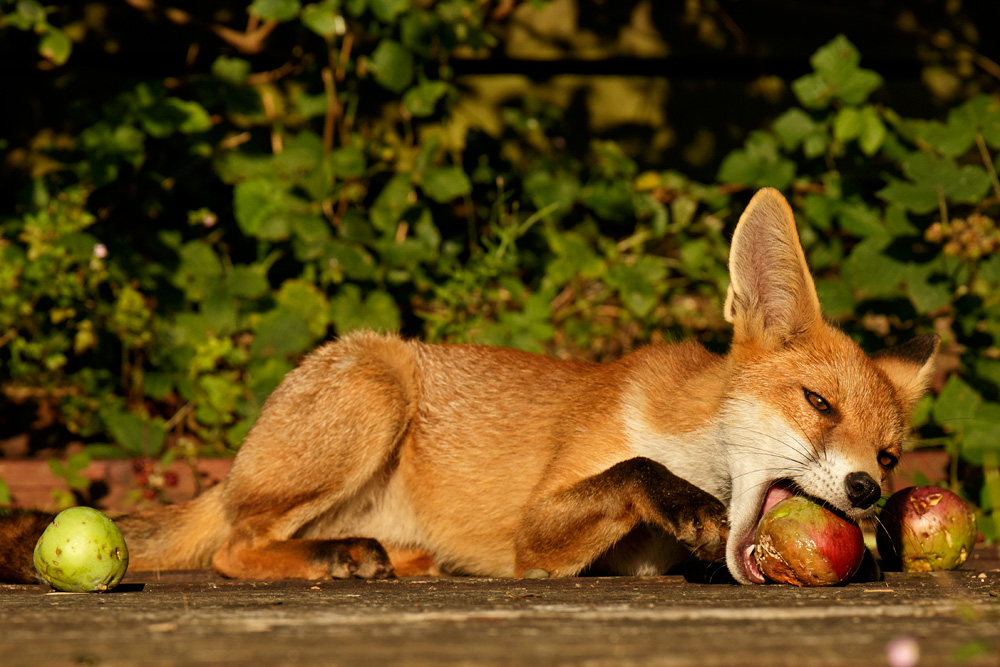 She didn’t actually eat the apple, but she did enjoy lapping up the juices that flowed from the slightly rotten fruit. I’ve also seen her pulling at the apples on the tree. This is her about a week ago. The apples weren’t quite ready to drop and she eventually gave up! 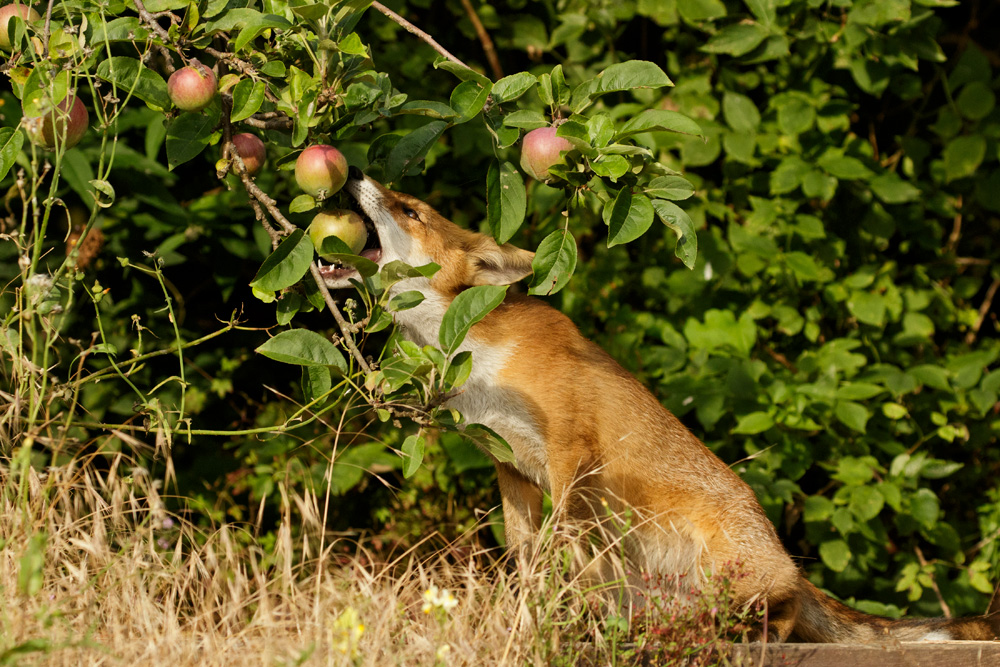 It Begins with a Kiss (Fox photo special)

The fox cubs were enjoying the late afternoon sun today. Lot’s of lolling around and sleeping, but the Little Dog Fox is (at 4 months old) reaching that awkward adolescent stage. The cub we call Long Nose is the other cub… 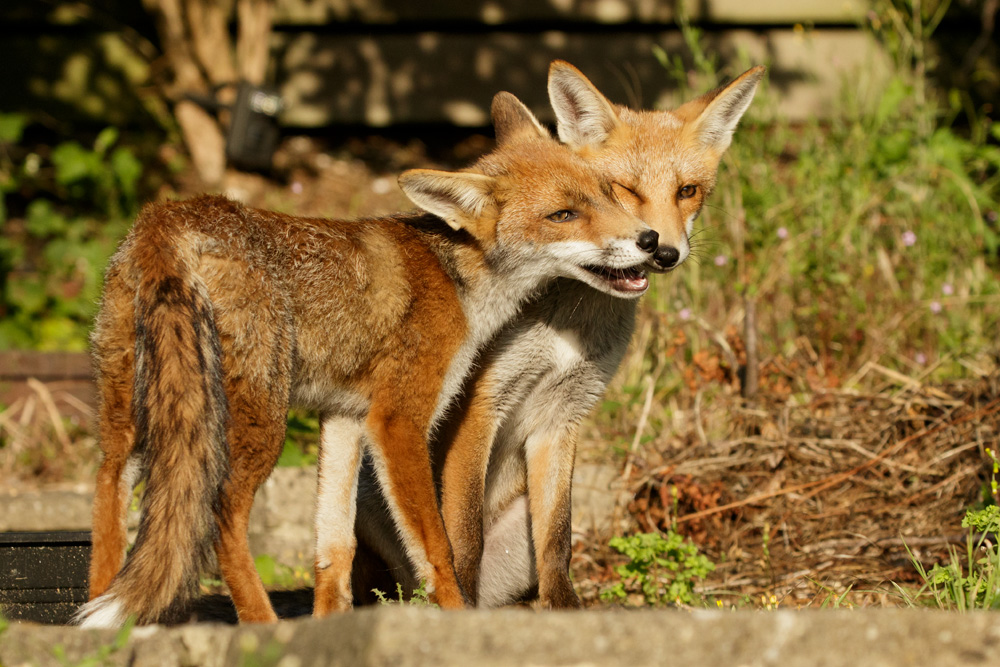 It begins with a kiss 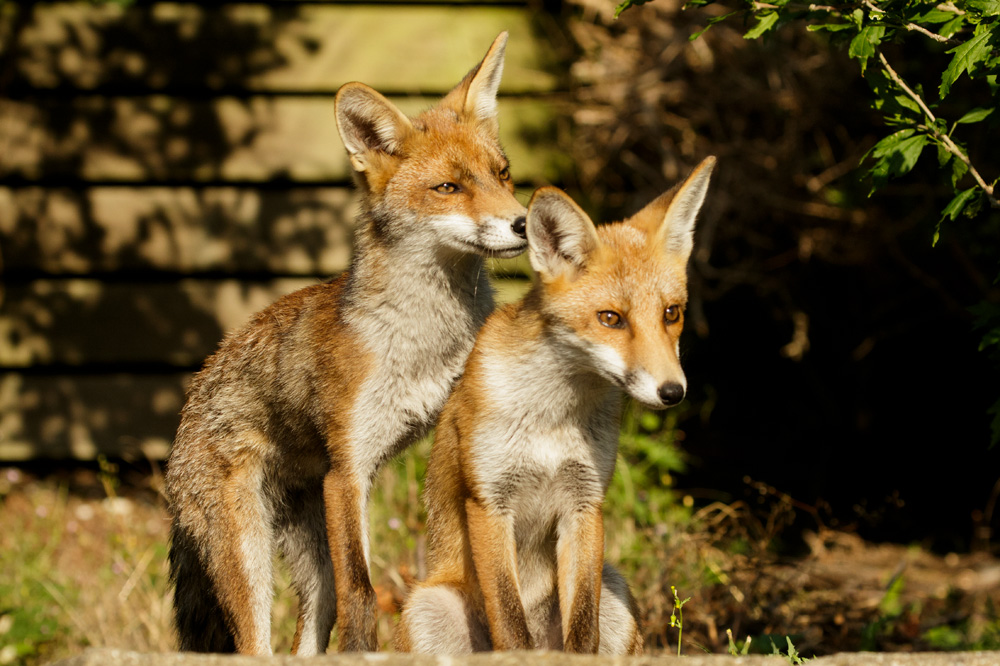 The Little Dog Fox gets romantic with Long Nose 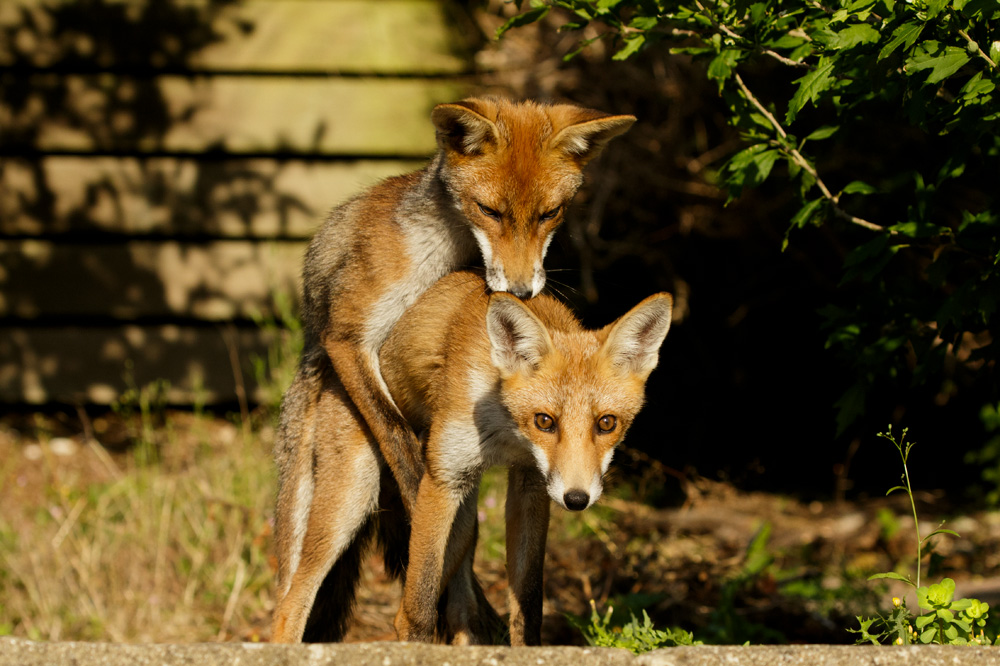 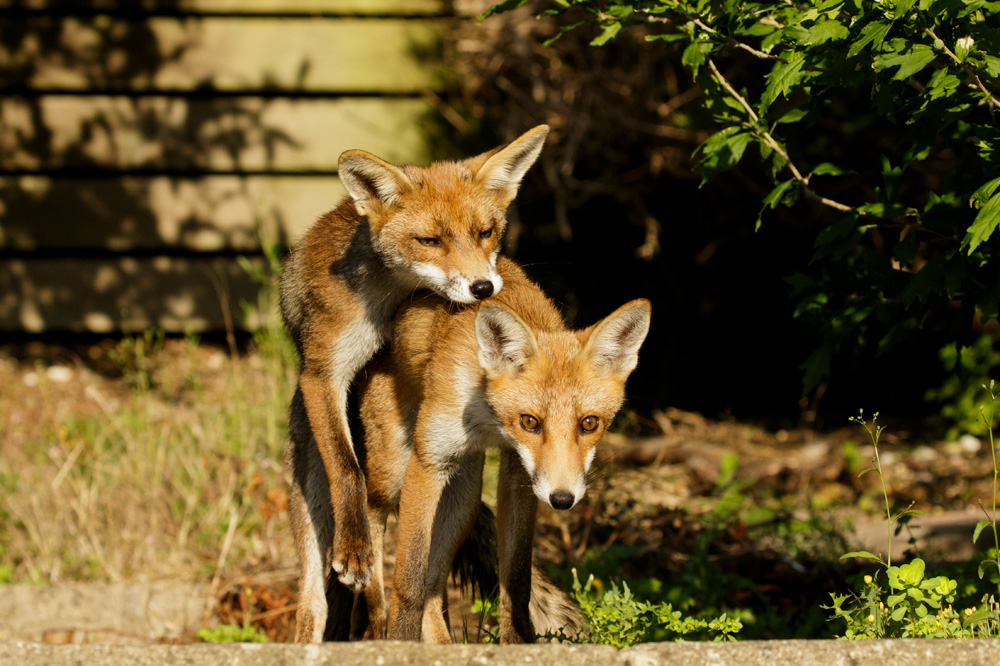 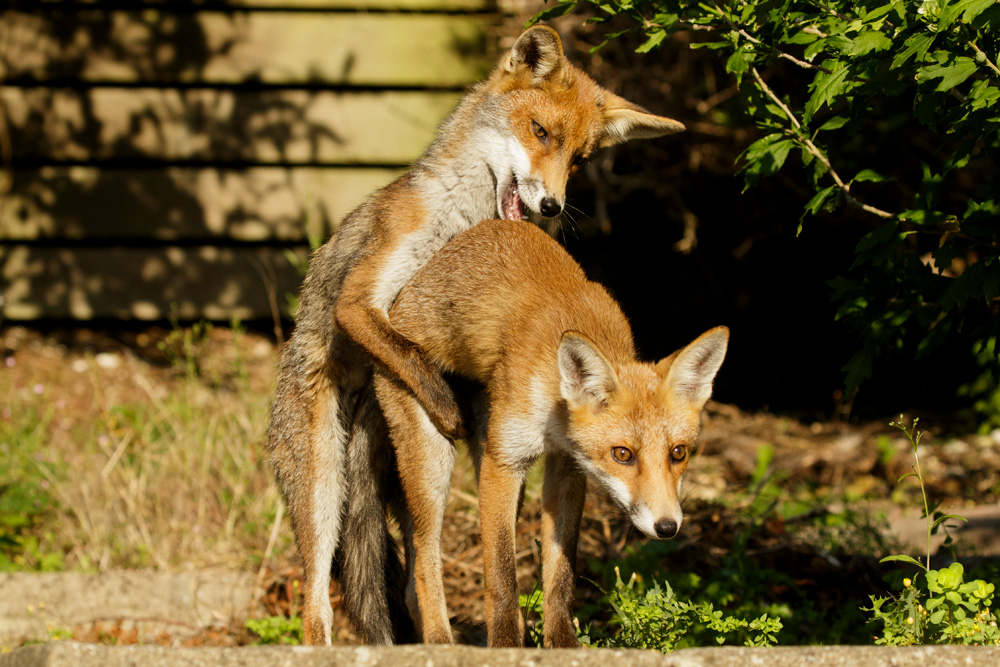 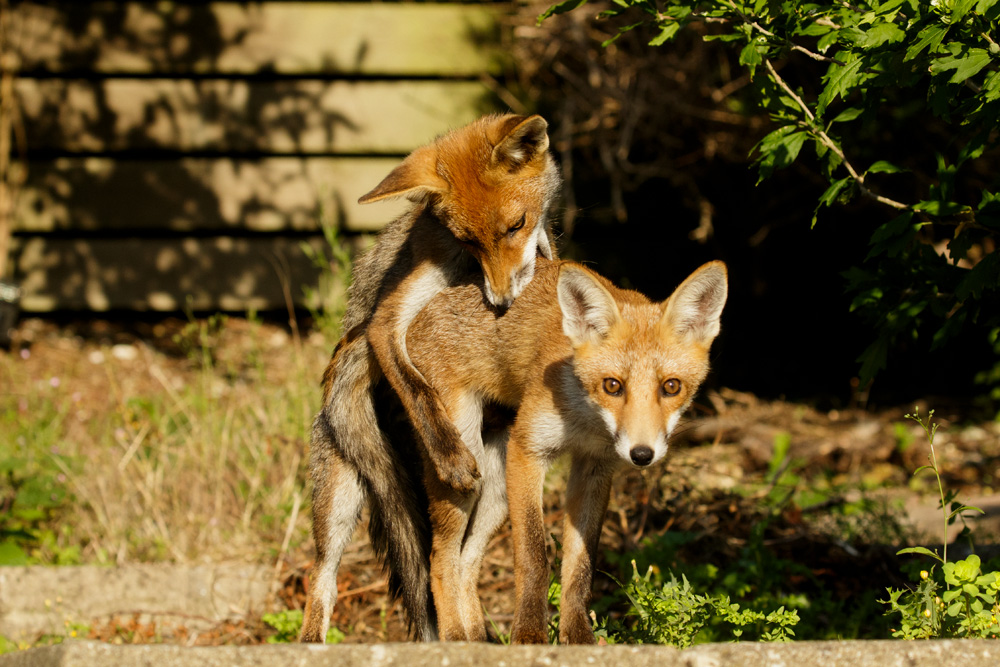 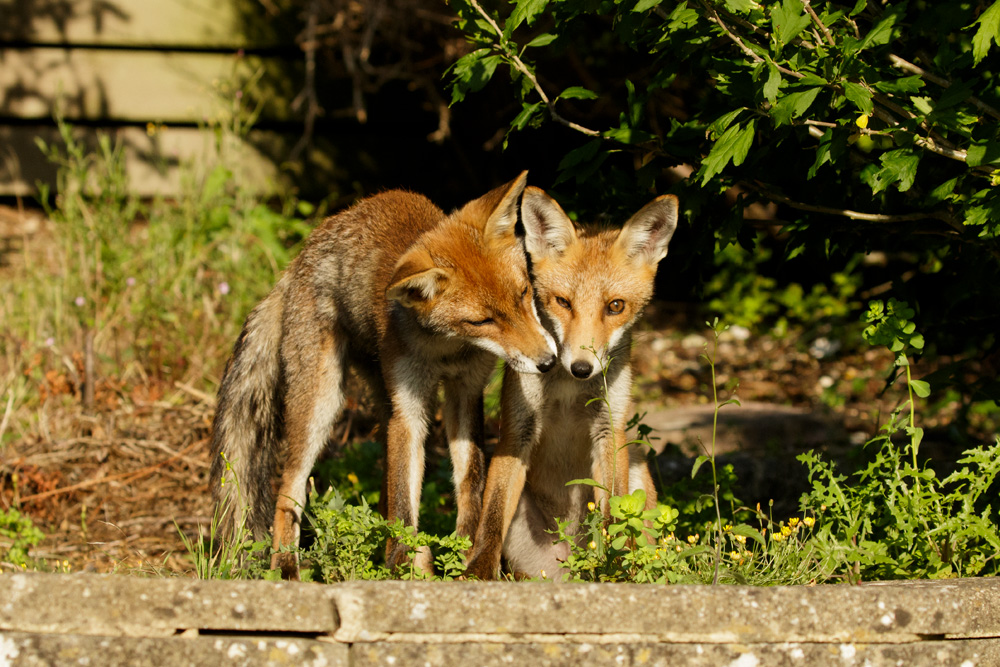 And it ends with a kiss!

This is all play for the cubs… they won’t start breeding until about 9 months old. And an interesting side fact I learnt this week from the excellent BBC film ‘The British Garden: Life and Death on your Lawn‘ is that one litter of fox cubs can have up to five different fathers!