I’ve been watching families of foxes visit our garden for over 15 years and in that time I have only seen a vixen feeding her young via remote trail cam footage, and even then only very rarely. Our latest vixen, Stumpy, is generally more cautious than some others we’ve seen; and although she lets us know she is around she rarely approaches too close, always allowing a self-determined distance at which she is relaxed (somewhere in the region of 10-15 feet). Despite that caution (or maybe because of it) she has provided one of my best moments of watching these fascinating animals.

I took the following sequence of photos on 22nd April, only the second time I’d seen Stumpy with her brood. The cubs were born very early March (estimated) and so are around 7 weeks old in these photos. I was about 20 feet away, keeping very still and hoping that the remote flash unit was positioned well enough to throw some light on the scene. The sequence begins when a couple of cubs start pestering mum.

I don’t think Stumpy was too comfortable being quite so exposed in the centre of the garden. She quickly ushered both cubs over to a corner where there is more undergrowth and cover. She may have also been aware of the rest of the brood, which quickly emerged to surround her.

It very quickly became clear that the cubs wanted feeding, and Stumpy was happy to oblige. I just held my breath!

I watched Stumpy feeding the young cubs for several minutes before she moved off to a neighbouring garden, with the brood following. I felt privileged to have witnessed the scene which is undoubtedly one of the highlights of many years of observation.

A few nights later the trail camera caught a short video sequence of her feeding the cubs. She was partially out of shot, but there’s enough in frame to make it worth posting. It’s just a 10 second clip.

Regular followers will know that we have been watching two pregnant vixens over the winter months, and as sure as spring follows winter we are now seeing some lovely fox cubs. They appeared in early April, at around six weeks old. I first spotted them on the trail camera footage.

The parent vixen of this group of cubs is Stumpy, the vixen with a shortened brush. She’s around 2 years old. Wolfy, the older vixen who I’ve photographed a lot over the last few years, vanished from the scene in mid-April, either because she has moved her brood due to competition from the younger vixen or, sadly, she may simply not have survived. We’ve not seen her cubs, but then neither did we see any of her brood last year. Our last sightings of Wolfy were of her sleeping in the garden in the early morning in mid-April.

I first photographed Stumpy and her new cubs in late April. This is one of my first pictures, and at this stage I was being ultra cautious not to disturb or spook her or the little ones. It was a lovely cute pose and a nice way to start things off. I just used a standard on-camera flash unit for this one.

The trail cam footage suggested there were six cubs in total, a fairly substantial brood for a young vixen. It also showed that the dog fox was playing his part in looking after the cubs. He is by far the most cautious of the foxes and I have only very rarely caught fleeting glimpses of him passing through.

Throughout these early photos I was careful to keep very still (movement sends the cubs scattering), and only gradually introduced a second flash unit to improve the lighting. The one drawback is that once positioned the off-camera flash can’t be moved and everything therefore depends on where the cubs choose to go. It’s good when it works though!

That’s enough for the first post in this series, but I can promise something very special in Part 2.

Everything in today’s post was taken yesterday… I’ll start with the photos (technically taken in the early hours of this morning) and then move on to the video (daytime in full colour). 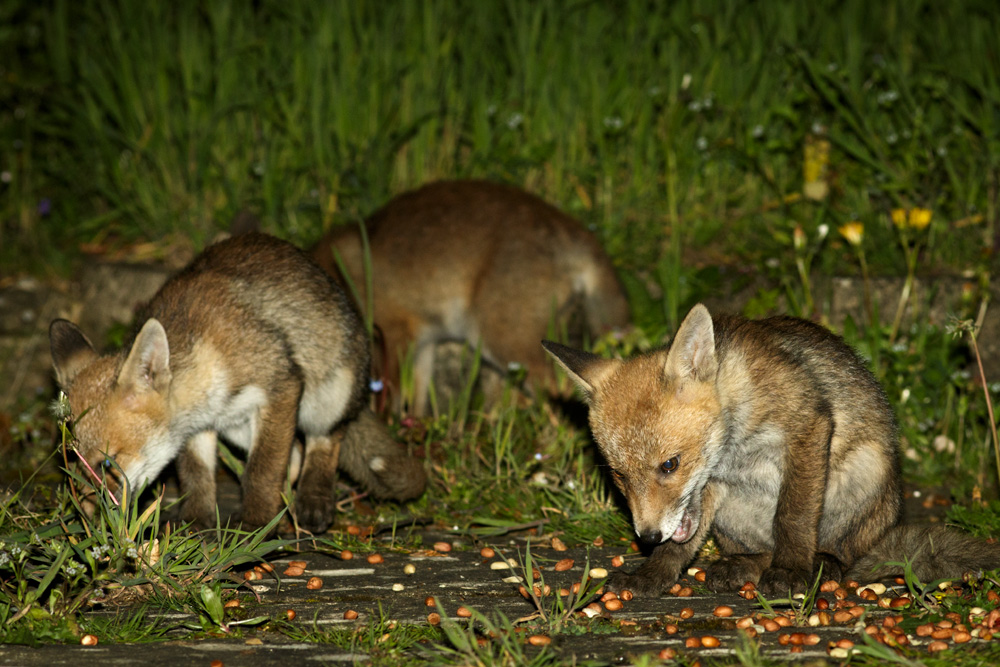 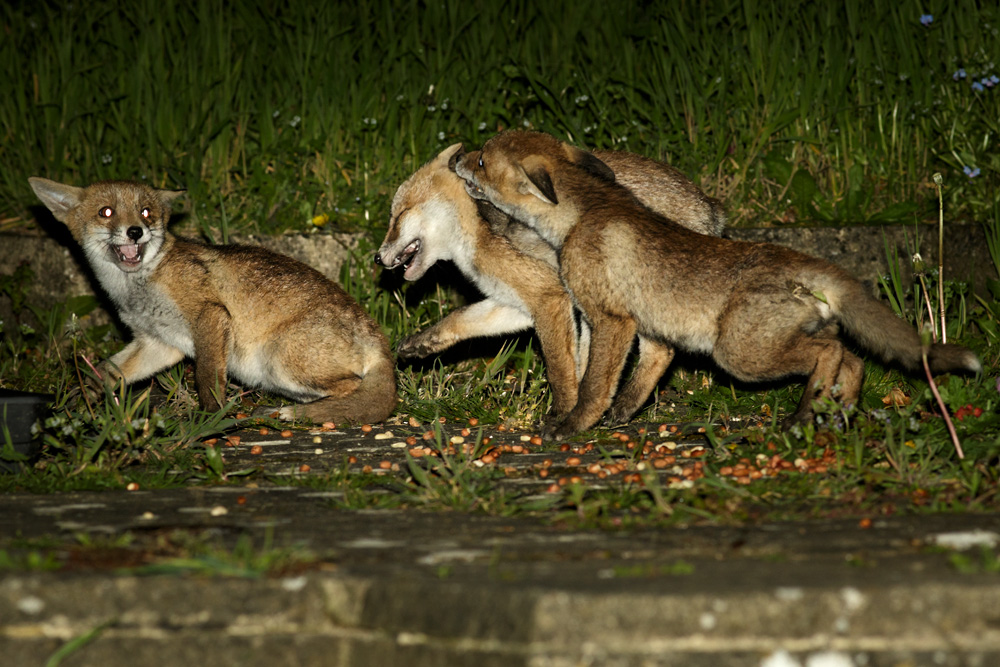 It never stays peaceful for too long though! 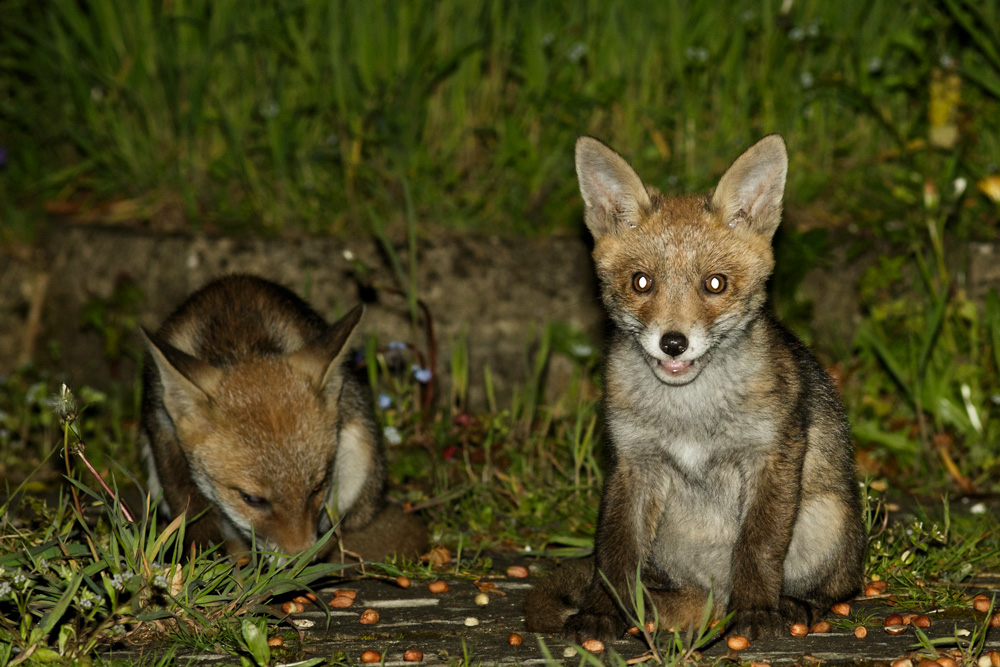 But the fighting is short-lived… 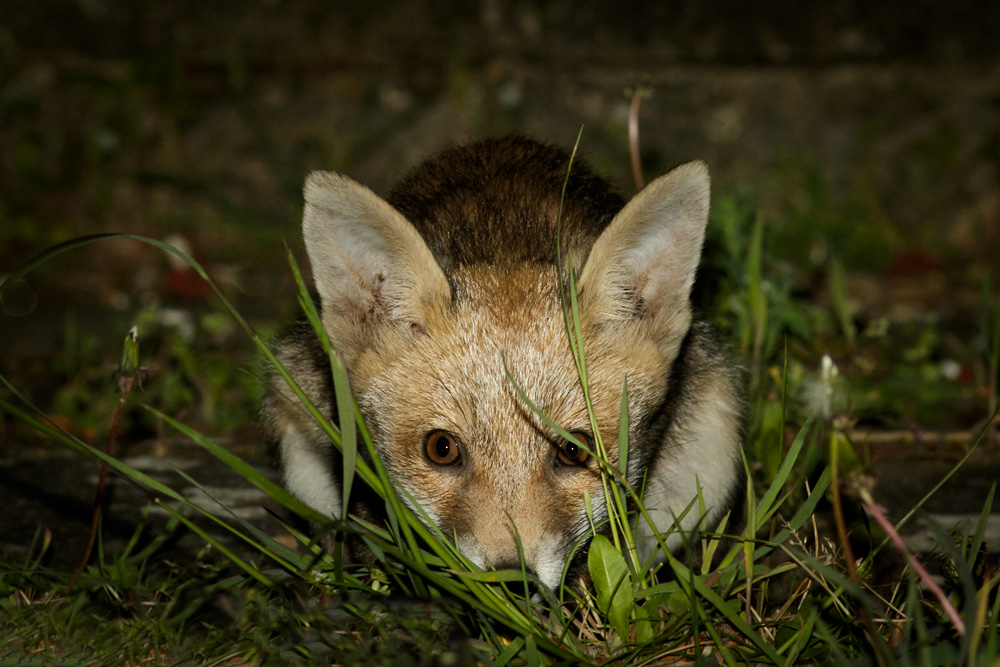 Hiding behind a blade of grass

Now the video.. taken with my new trail camera. These clips are in daylight, but the night quality is also pretty good.

I’m sure there will be more soon!