A Touch of the Dark Side

Don’t worry, there’s nothing too sinister about this post. The title is a reference to camera settings.

There was some fairly bright sunshine early this morning and while taking yet more pictures of the heron, I spotted a cormorant fly over. When photographing a dark bird against a bright sky I tend to slightly under-expose by setting the exposure compensation to a slight positive number. Anyway, the cormorant swept down to the water, where everything is much darker. To retain a usable shutter speed I scrolled the compensation setting into the negative zone. I was aiming at around -1, but doing it on the fly I overshot so these were taken with a setting of -2. This had the effect of keeping a respectable shutter speed (around 1/1600s, keeping things nice and sharp), but leaving everything rather dark. A little bit of adjustment in Lightroom was needed to even things up a bit and bring out the green reflections in the water. 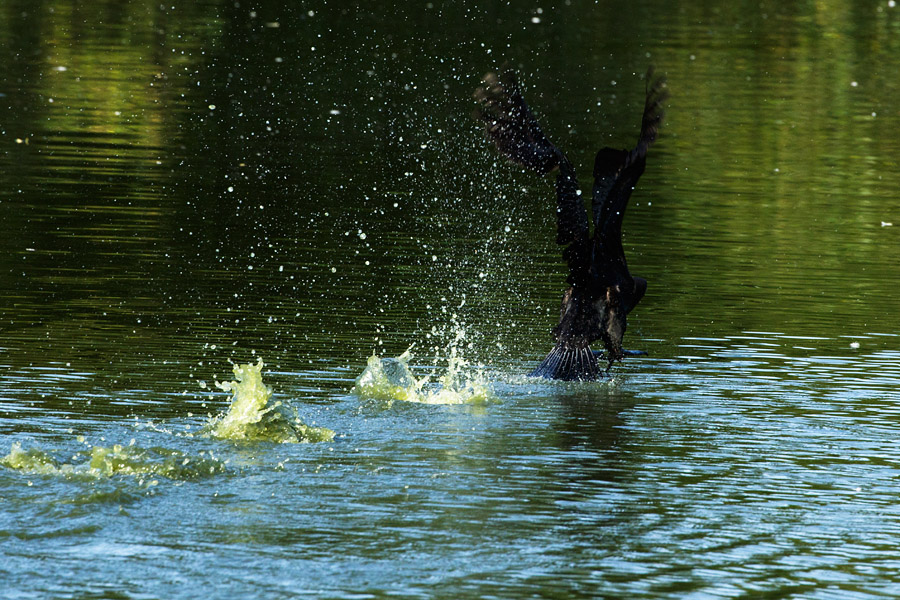 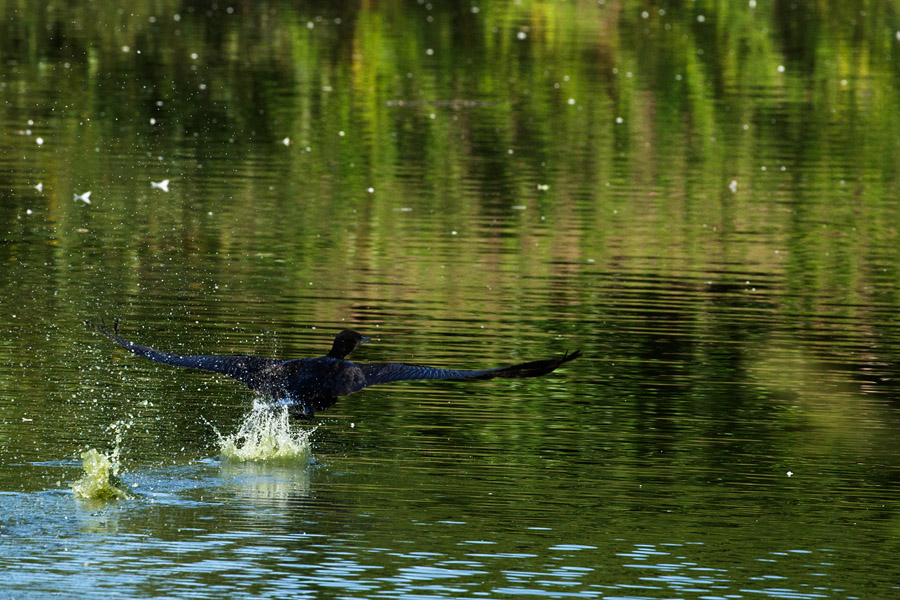 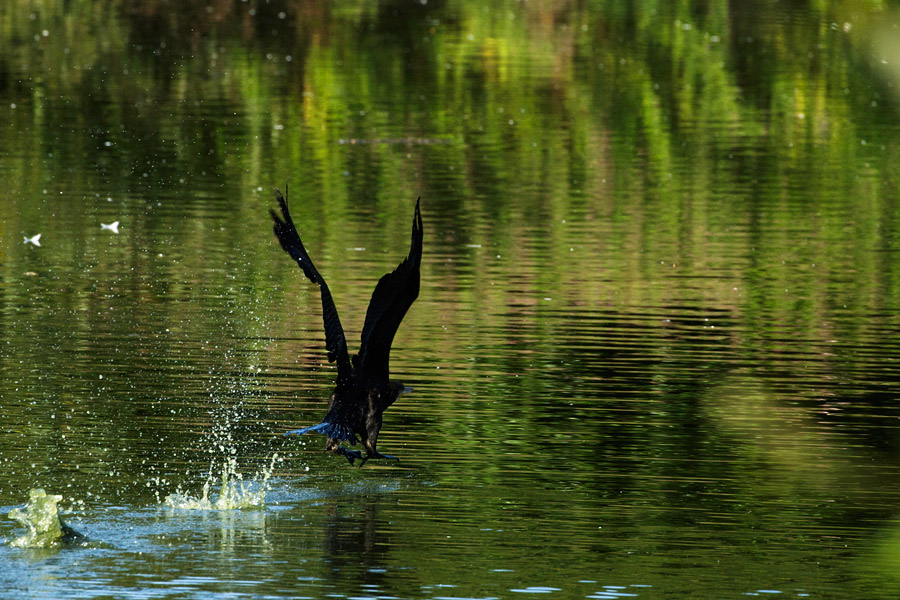 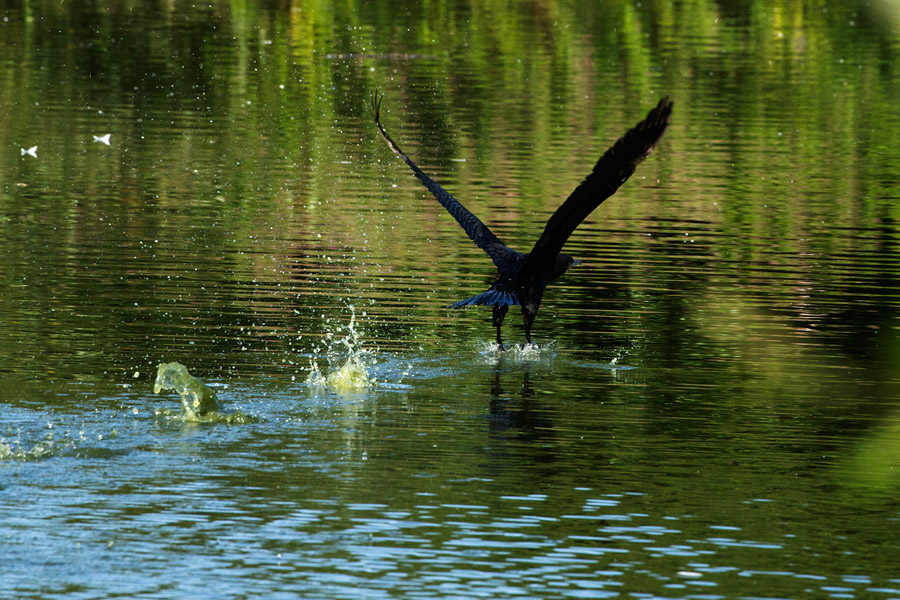 I do like deep colours and dark backgrounds, and by lunchtime the clouds had rolled in and there was even a touch of rain. Everything was grey apart from one shaded corner of the pond where some ducks had congregated. The overhanging trees provided deep shade, but that of course kills the shutter. To get anything usable I started at 800 (first shot which had a shutter speed of 1/250s) but then ramped the ISO to 1600 and – against the usual advice – under-exposed by -1. Normally under-exposing at a high ISO is risky as it can increase the noise in the darker areas, but only if the intention is to lighten the photo later on. I wanted to keep the dark areas dark, and just have enough light on the ducks. I have made some minor adjustments (and cropped), but these are very close to how they came out of the camera. If I hadn’t under-exposed the shots would have lost impact and contrast, and frankly the shutter would have crawled. This way I have something sharp. And there really isn’t too much in the way of noise (even in the second shot which is the high ISO one). 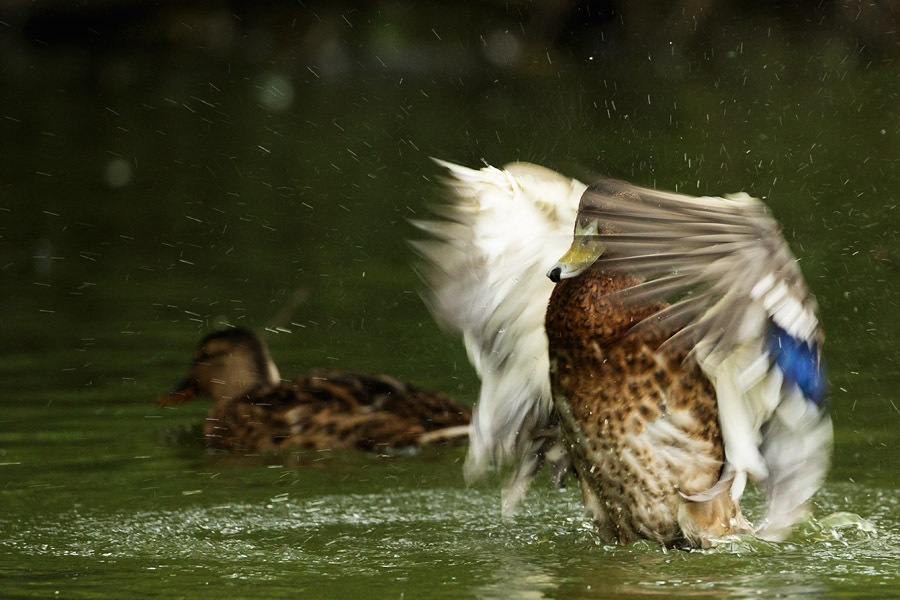 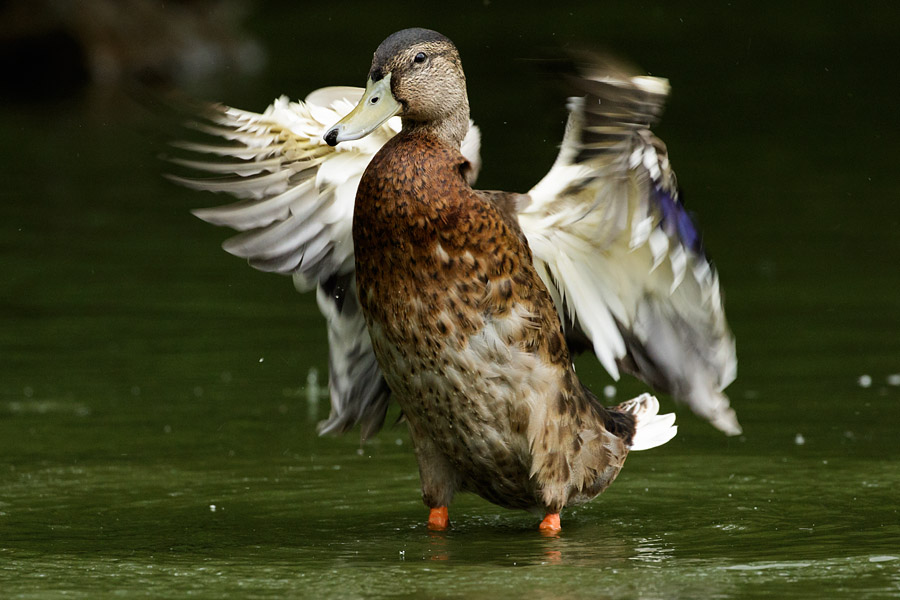 This is something of a return to some of the more regular species that abound at this time of year. Birds are getting ready for nesting and mating, and – common species at least – are very easy to see. 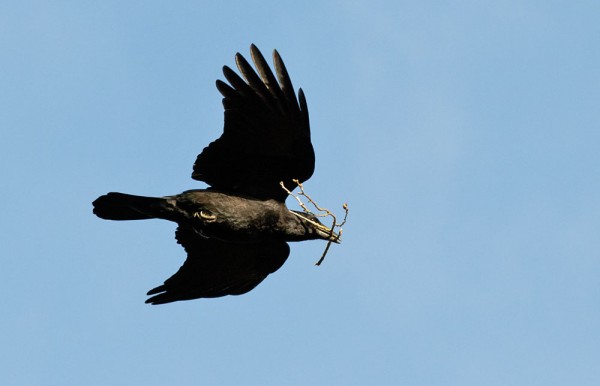 The blackbirds are taking to the rooftops… 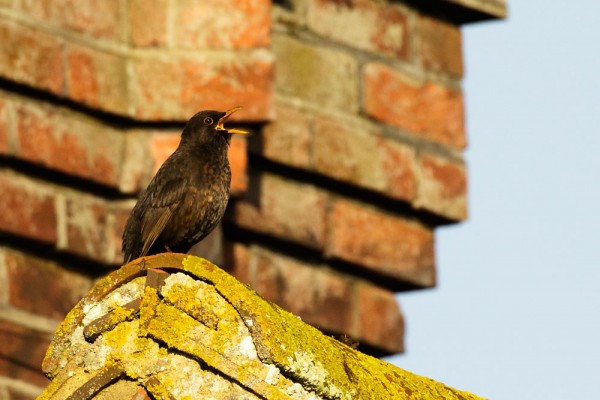 The robins are everywhere. This one was in a small wooded area near Falmer Pond. Nice early morning sunshine. 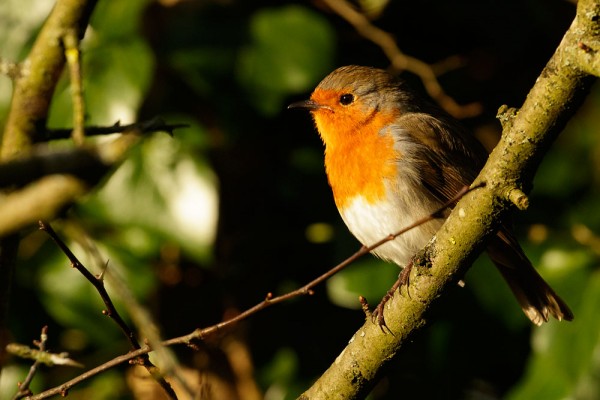 Possibly my favourite of the early birds, was this male mallard quietly sitting on the church wall. It took me an age to get round to the best angle, but here it is. 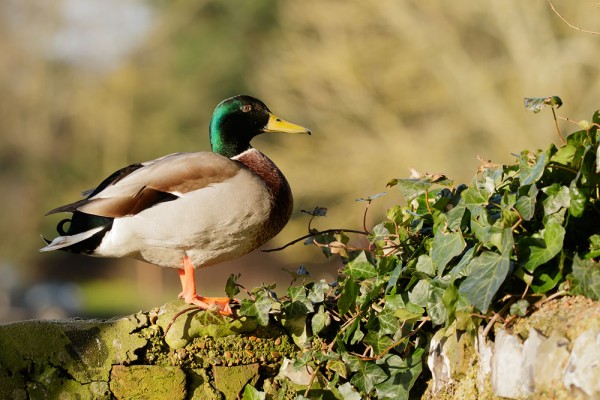 The final shot was taken at lunchtime, when the light was less helpful. It made a change to see a herring gull doing nothing much at all. 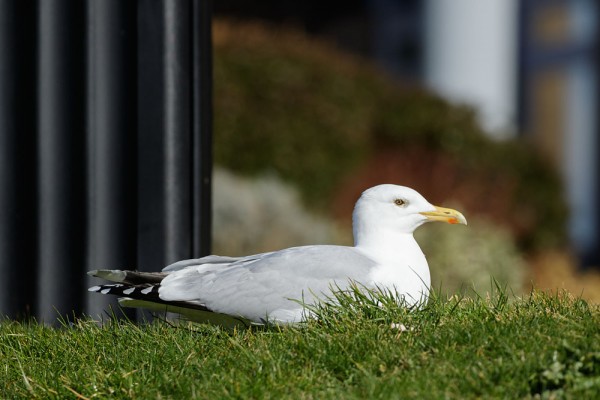 More from the Pond

After yesterday’s cormorant fest I thought I’d take a look at some of the other birds that brighten up the pond at this time of year. The first couple of photos were taken yesterday, the rest are from today.

Few birds make more of a mark than this extravagant and noisy Muscovy drake. 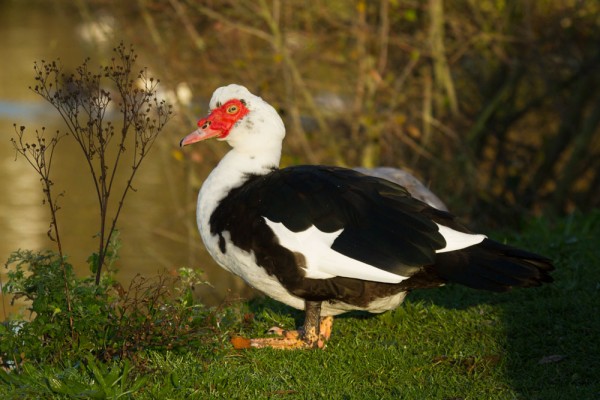 The more common mallards are there as well, but they sometimes need the help of lighting to really look their best. This is an early morning shot of a female mallard. 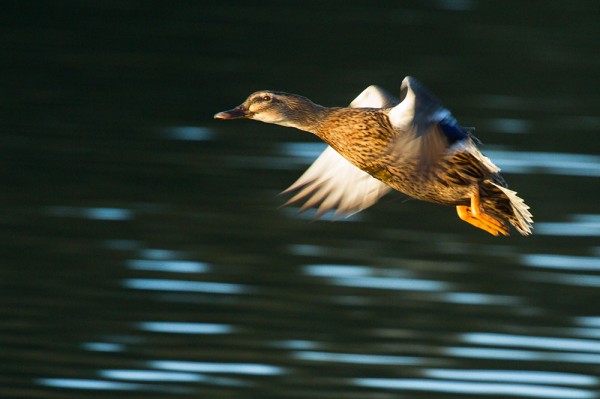 Winter is on its way and the black-headed gulls having discarded their summer plumage (the black head) and are now dressed for the season. 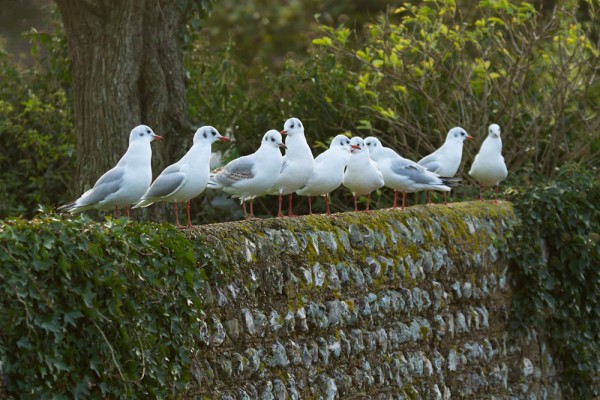 The collared doves just ruffle their feathers to get in the seasonal mood. 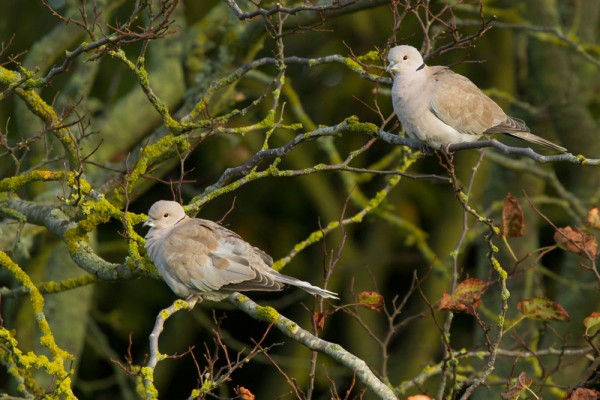 And in case you were wondering, the cormorant is still there; and still laying claim to the prime location on the pond. 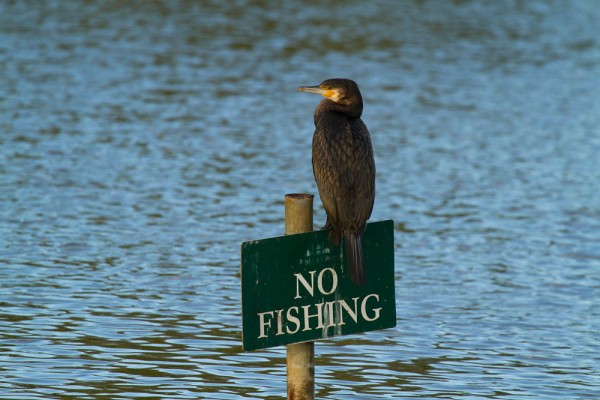