I’ve become consistently inconsistent in my posting, partly due to fewer opportunities to spend time out with the camera but also because I am becoming a touch more picky about what I do post. Anyway, here’s a selection from the first week of April (8 days a week?) 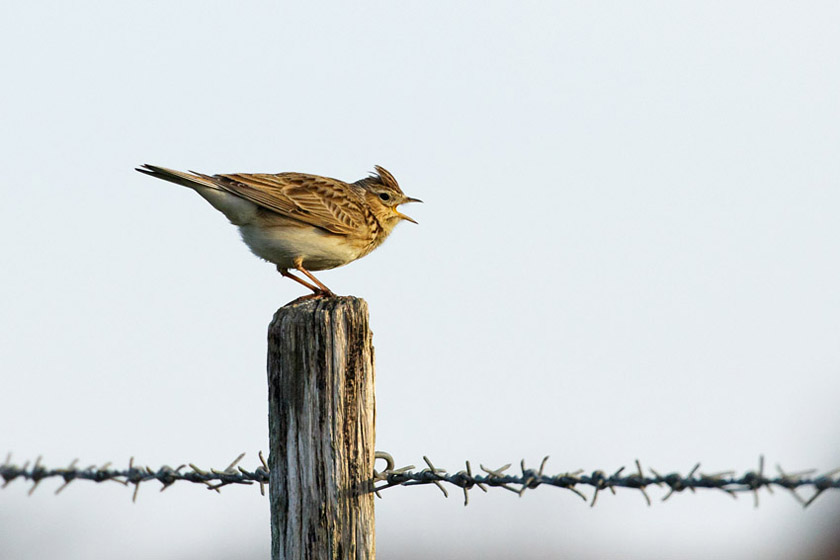 April 1st – I spotted this skylark on a fencepost at Sheepcote Valley on my way in to work. 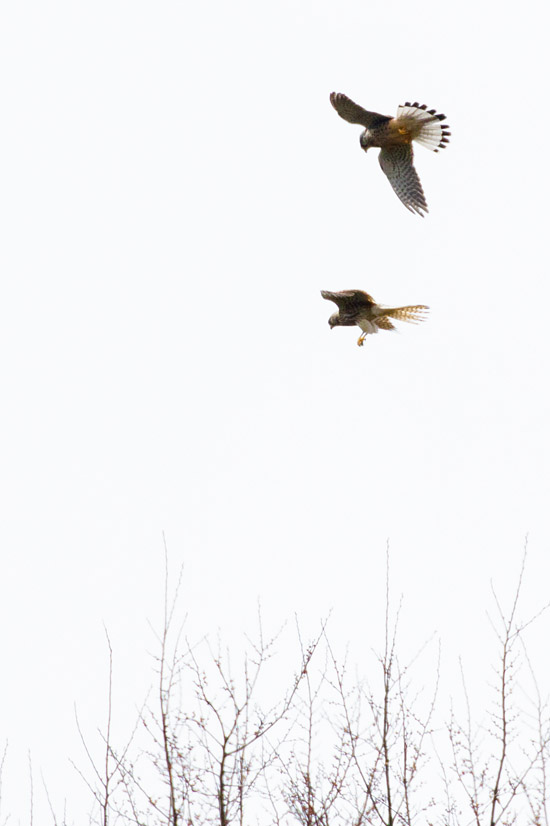 Lunchtime – a pair of Kestrels over Moulsecoomb, University of Brighton 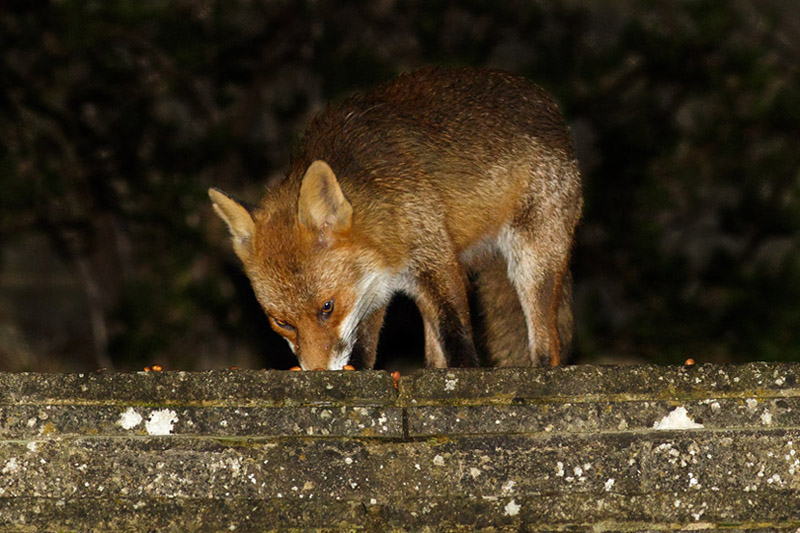 April 3rd – The first photo of a fox in the garden for quite some time. I was pleased despite the poor angle. 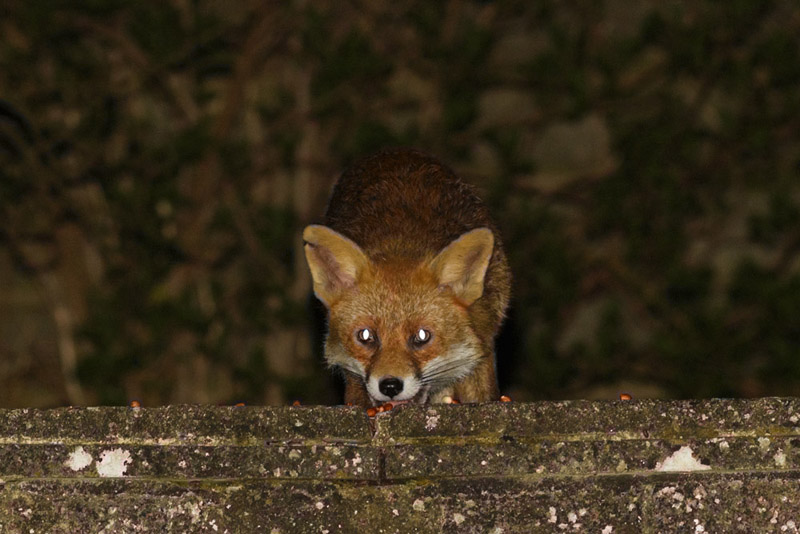 April 4th – another encounter with a garden fox 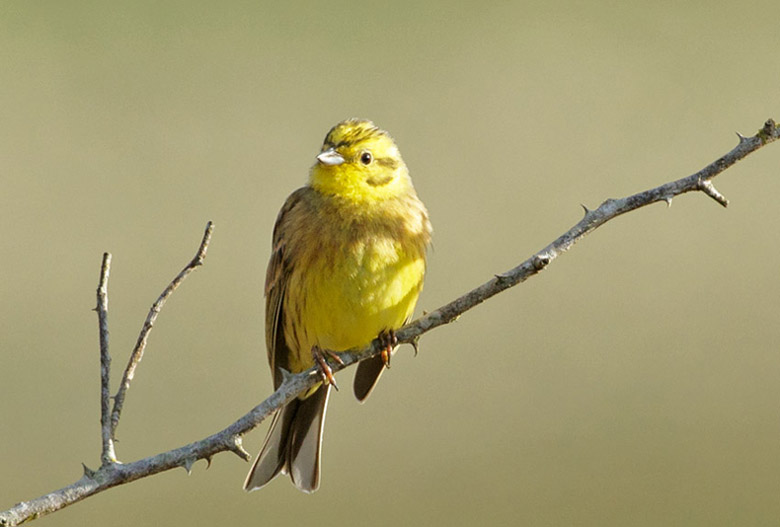 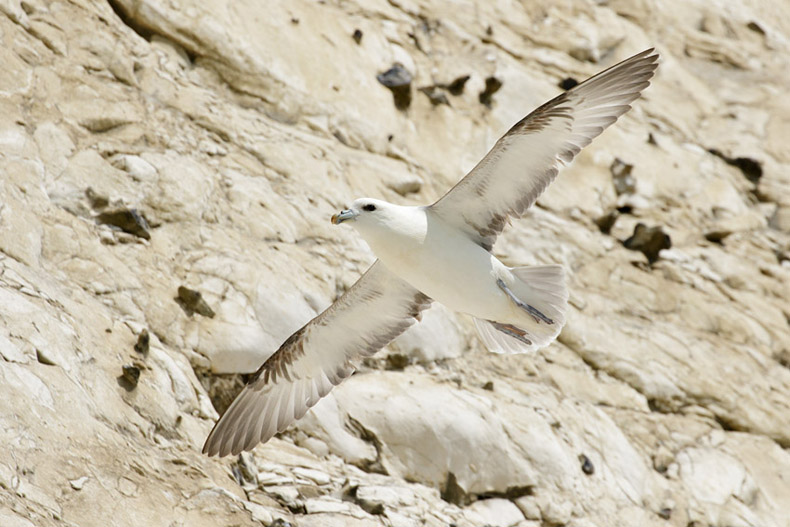 Today – a Fulmar at Rottingdean Cliffs, taken at lunchtime 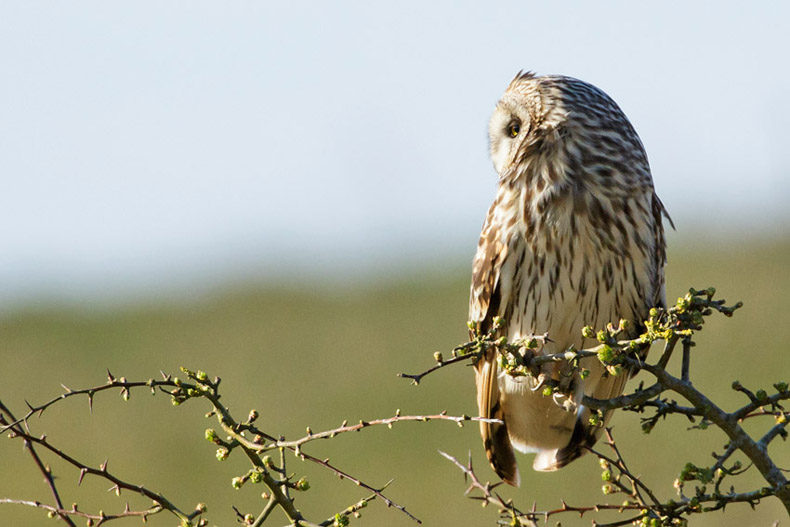 And after several missed attempts, a short-eared owl this morning at Sheepcote Valley, Brighton 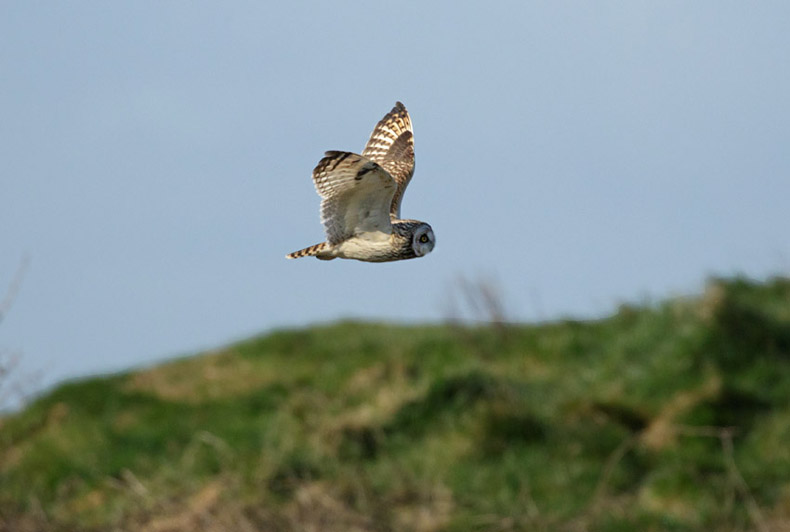 Final shot for today – one of the owls flying over the edge of the golf course.

Out in the Fields

Today was definitely a taste of summer, and too good to miss a chance to head out to the local downland fields at lunchtime. There was just enough of a breeze to keep things comfortable, and the views are always good even if there’s little else around. 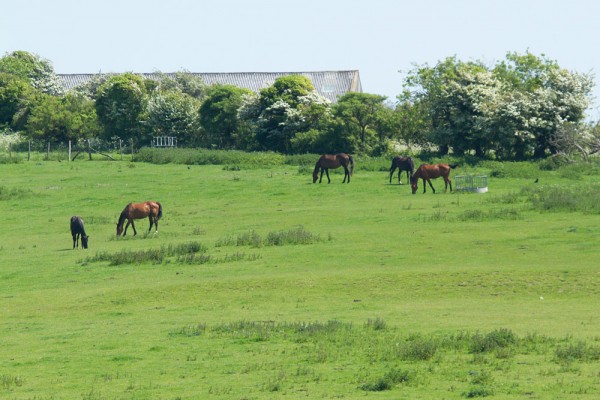 A few yellowhammers were down at ground level, feeding. 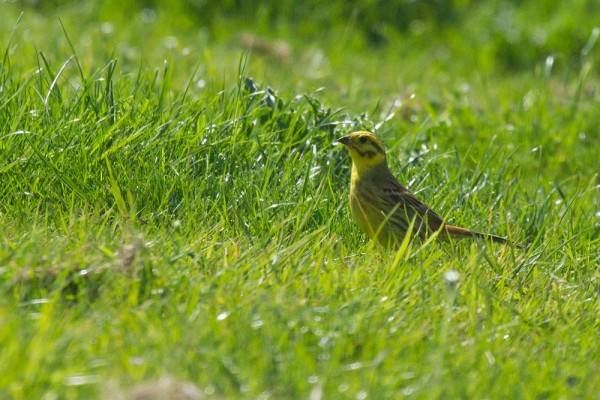 I’d all but given up and was heading away when I noticed a slight inconsistency in the distance. Peering through the camera I could just make out a couple of foxes at the edge of the field. They were by some dense shrubs and were warming themselves in the sunshine. 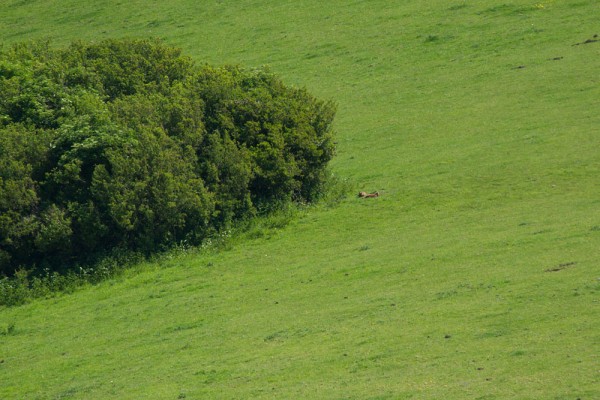 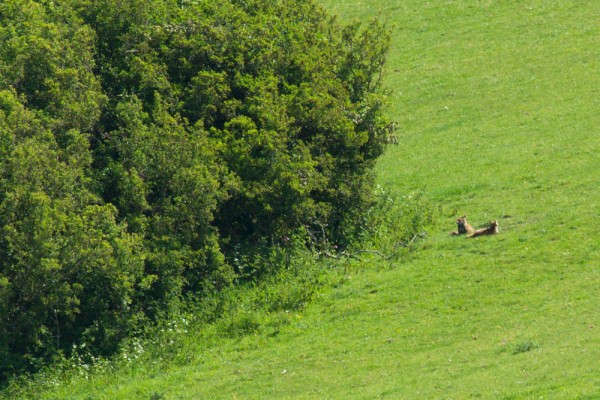 The third shot was taken a few minutes later after they had retreated back under cover. I was actually photographing the rabbit in the top of the frame and only spotted the fox lurking near the bottom of the image later on. 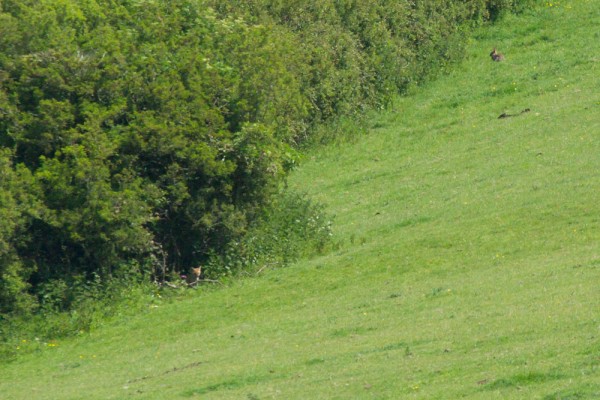 On another day I’ll do better (I can hardly do worse), but it’s always a treat to get photos of foxes in fields.

Back on campus the blue tits are still actively feeding their young. The adult pair was gathering food so quickly that they almost crashed into each other as one was entering and the other leaving the nest box. 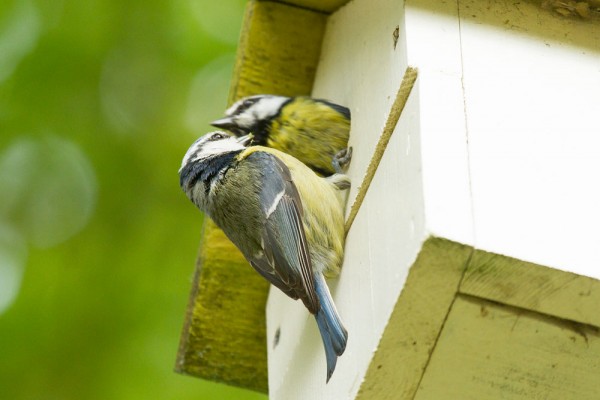 It can’t be too long now before the young fledge. I’d really like to see that, but since I don’t know quite when that will be and my time is constrained I’ll need a fair slice of luck.

The final photo tonight is to make up for all the eye strain in picking out the daytime foxes. This is the nicked ear fox in the garden this evening. 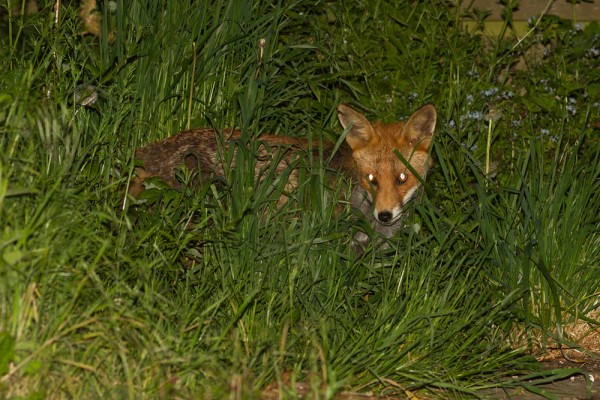 More grey skies and poor light, but the birds are becoming active despite the poor weather and none more so than the local blackbirds. This female was the highlight of an admittedly poor morning at the pond. But she was worth a couple of photos. 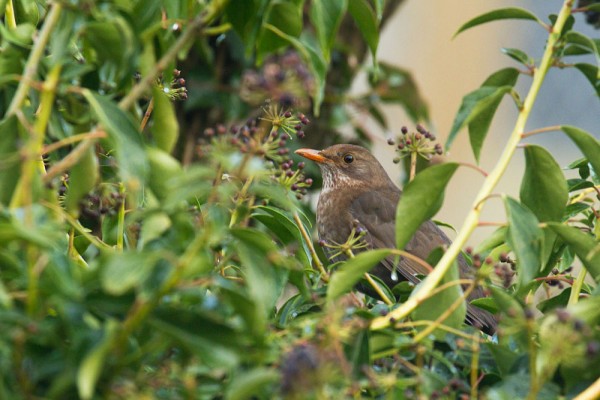 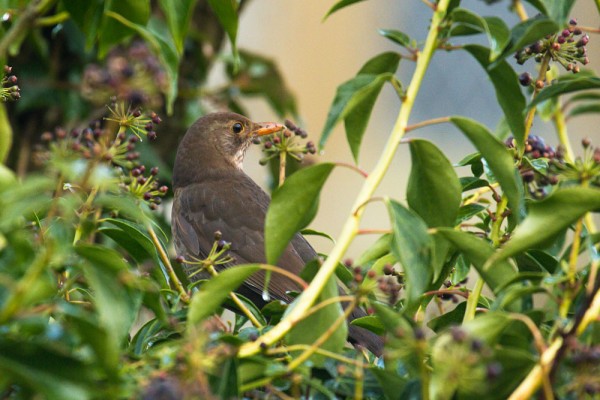 At lunchtime I went back through the woods. No buzzard today (but I am hopeful of more sightings). I did, however, photograph one of the recent storm casualties. There are several tree in this condition, and a large number of broken boughs. 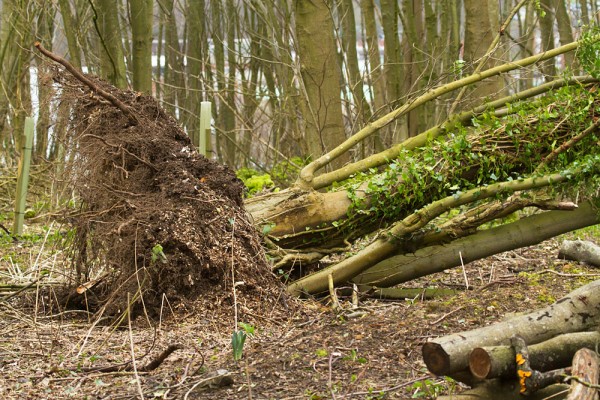 The woods lead out into local farmland, and (suitably booted) I ventured out across the fields. I could see pigeons in the distance, and crows and a good-sized and highly mobile flock of yellowhammers. With more time I might have managed something slightly better than this. 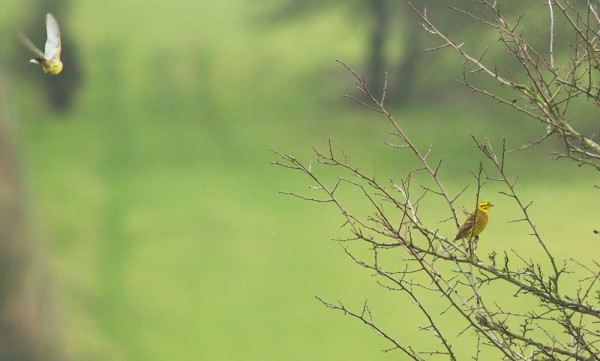 Yesterday I mentioned that I’d set the trail camera to video. Here’s the first clip of the year. Pretty is out with another (male) fox. It’s raining (when isn’t it at the moment?).