There may be something of a theme developing here (see yesterday’s post) as I’m still focused on the dark side of the camera, and once again these are shot at a high ISO (1600) with lots of negative exposure compensation. The main sequence is a heron which after staying in fairly open areas finally pitched up just in front of some trees that are adjacent to the pond. This provided the dark backdrop I was looking for. There was enough light coming in to bring out the heron’s colour, but exposing for the background would have washed everything out. Hence dialling down the compensation to around -2. I lifted the whites in processing these, and damped down small parts of the background with the burn tool. 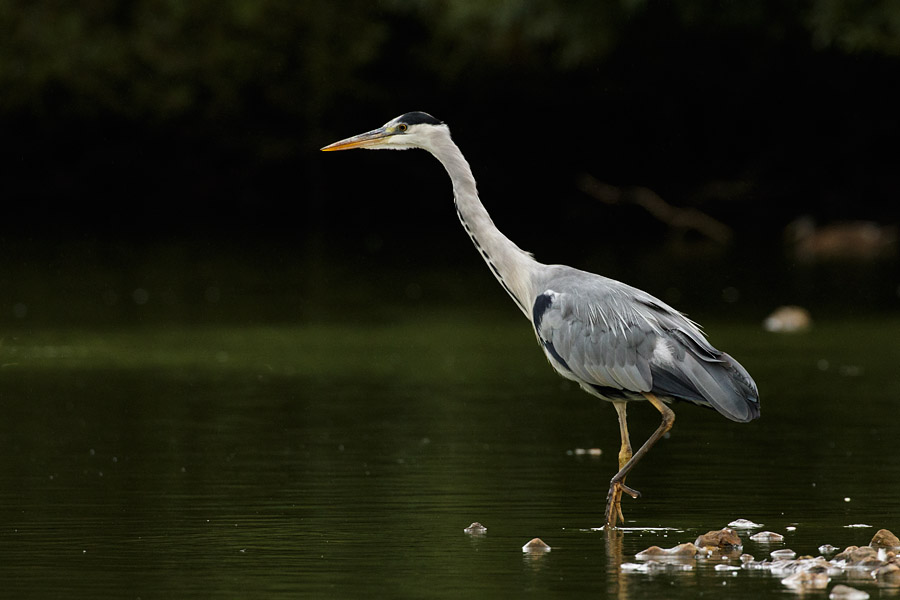 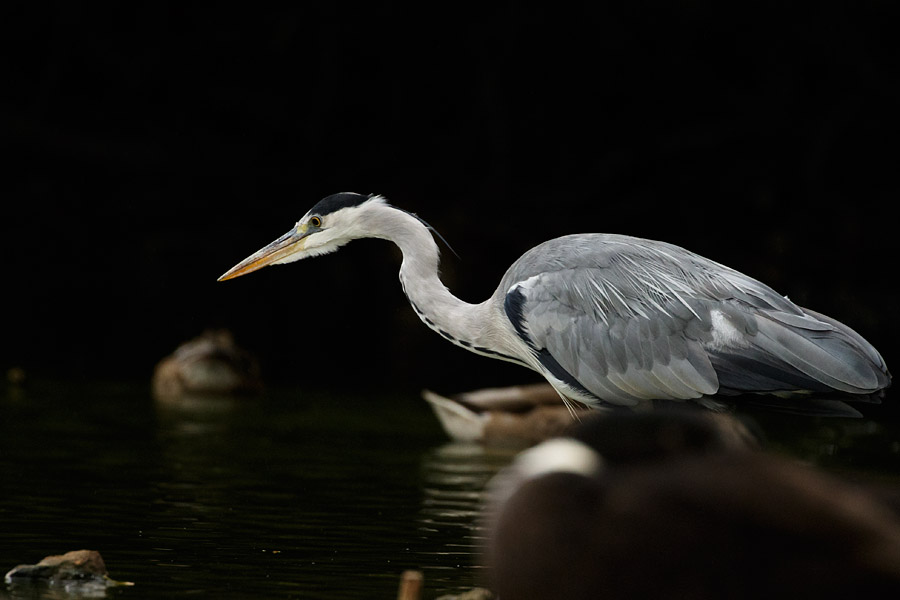 Shame about the duck in the foreground, but I liked the posture. 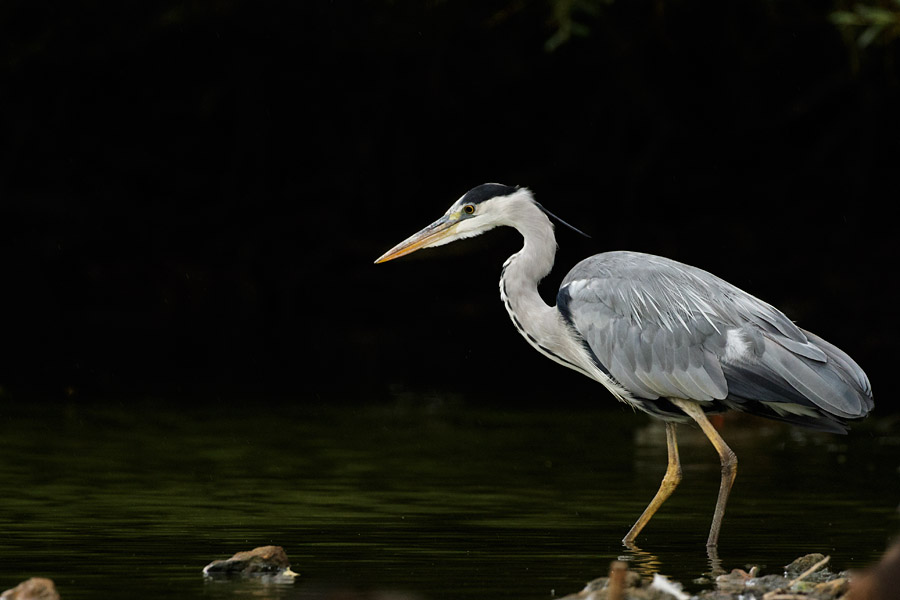 This is my personal pick. Nice and clean.

That proved to be a fruitful corner of the pond. While I was watching the heron I noticed a moorhen going back and forth. Tucked away under the low branches and among the tree rots a pair of chicks were scrambling around. I had to squat down right at the edge of the pond, with branches pressing all around to get any clear line on the chicks, and even then they were mostly obscured by foliage. I got three usable shots of which this is the pick. Compensation on this is a modest -1 (anything more would have lost the detail on the bird). 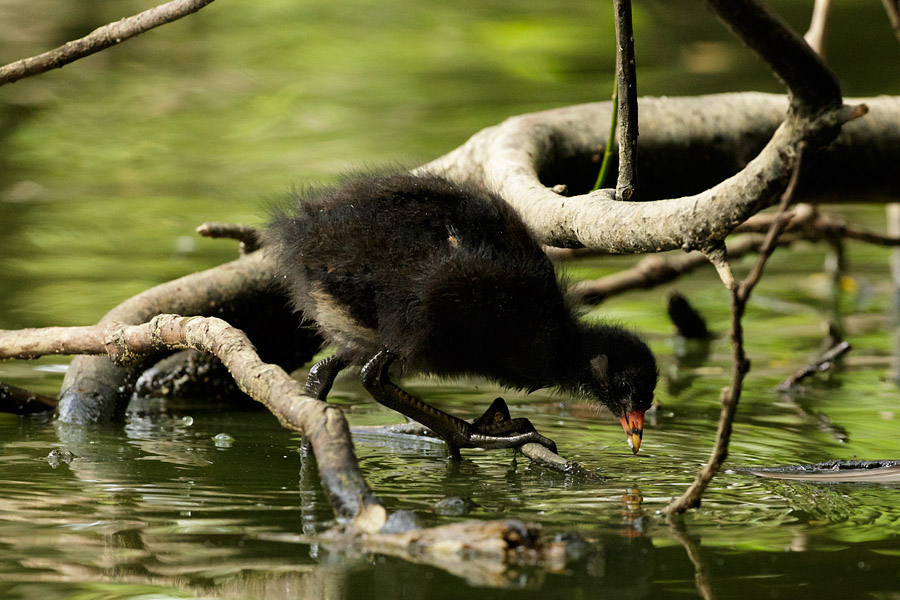 Moorhen chick among the tree roots at Falmer.

Back to the Pond

After a couple of weeks away from the pond, I was back there this morning and so were most of the usual gang. It didn’t take me long to find the local heron, hiding away under the trees on the wooded bank. 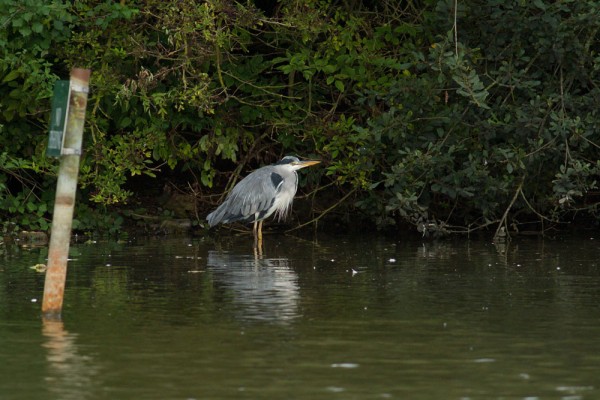 The greylags were there as well. This one enjoying a good splash (as were many of the birds). It’s a ritual that is extensive as the juveniles lose their downy feathers and adults complete their moult. The splashing serves a useful function of cleaning the new feathers of dust and mites. 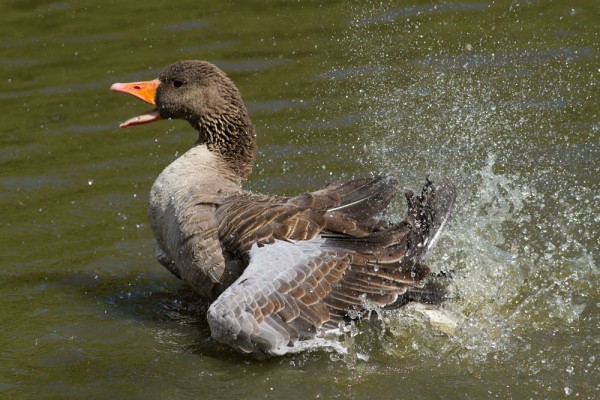 There were ducks (of course). This one was paddling in my favourite corner of the pond. 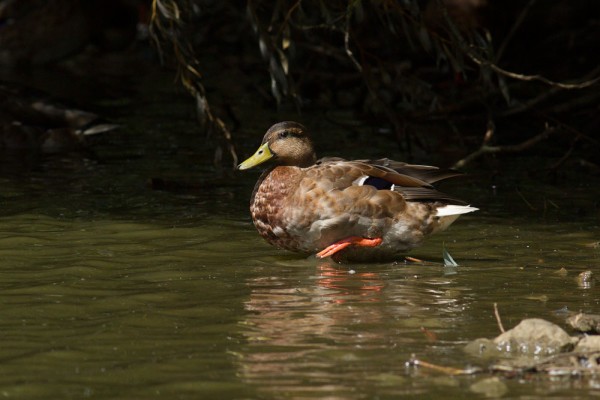 I was surprised (but pleased) to see that there were even some late-season ducklings swimming about. 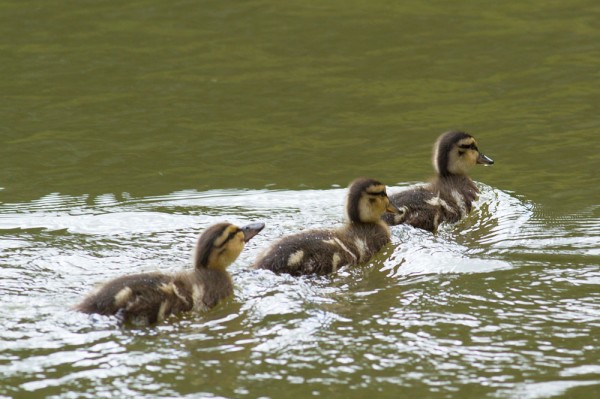 The gulls were there as well. These two young herring gulls were harassing the adult for food… with some success. 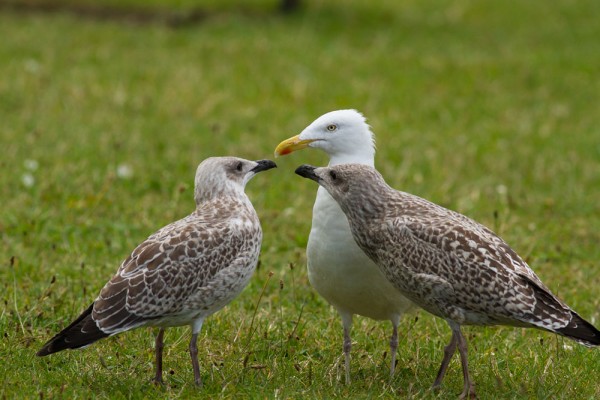 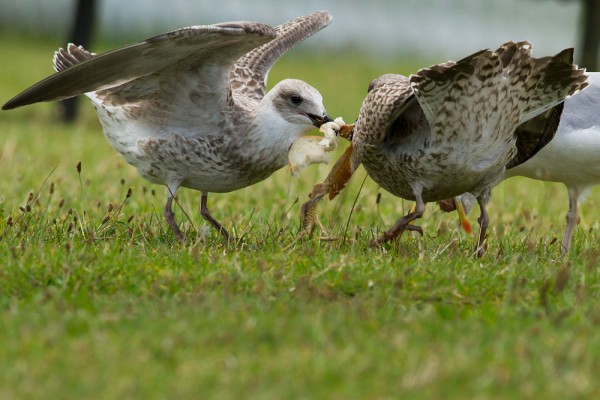 Up on dry land, the rabbits were in lively mood. 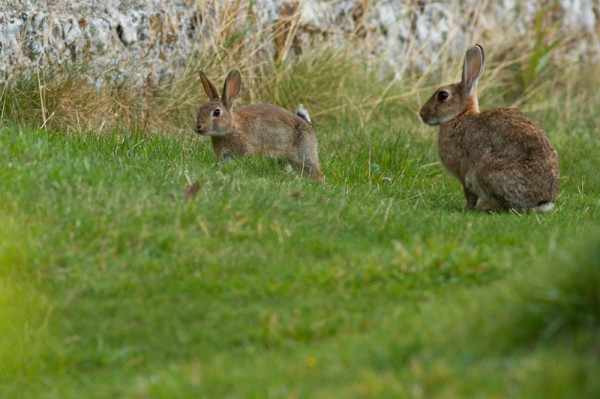 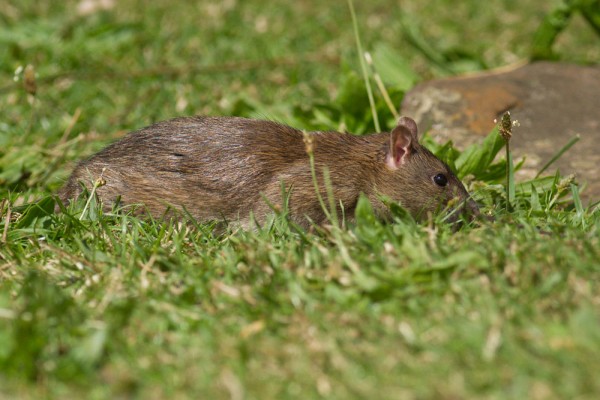 I’m still working on the gull special I mentioned a little while ago. It’s grown somewhat but it will get posted soon (within the next couple of weeks).

Precious few fox sightings lately, though the trail camera is picking up their nightly activity (plus a badger or two). The cast of characters is changing. The nicked ear fox has barely featured in recent footage, but there’s a young fox (this year’s brood) and an older fox with a stump for a brush who we saw several months ago but has reappeared after a lengthy absence.

It was a good day for bird spotting, with local sightings of greenfinches, goldfinches, pied wagtails. Even a kestrel. For once though the herring gulls are going to take pride of place. These shots are part of a longer sequence I took on the grass banks just outside the buildings at work. The gull on the right is a semi-mature herring gull (judging by the plumage it looks like a 2-year old). It was supremely uninterested in feeding the fledgling. 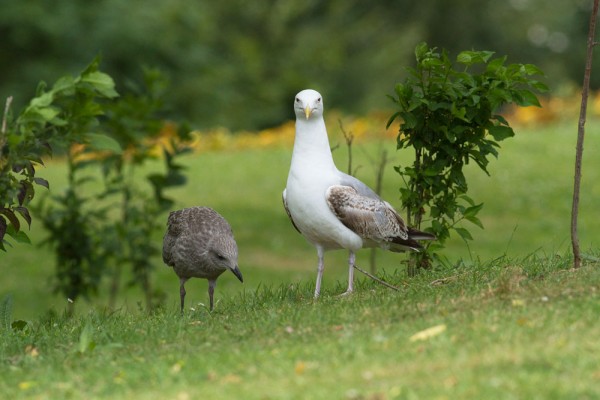 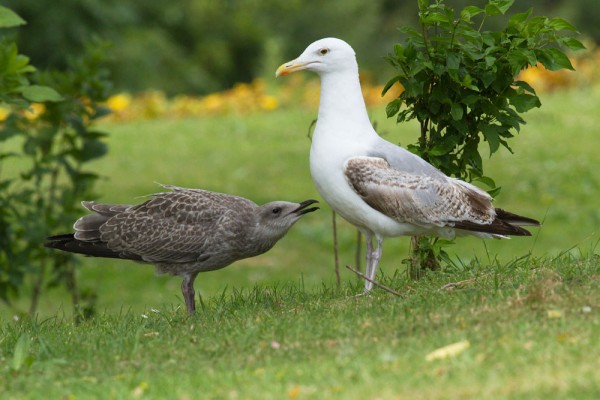 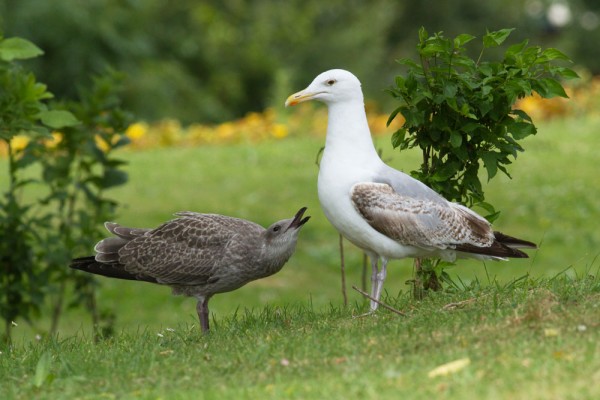 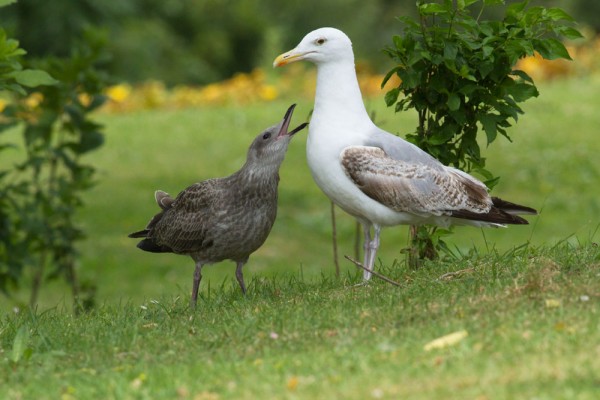 One bonus shot tonight. It doesn’t really fit, but I like it and I did see it today. I’d heard the green woodpeckers in the woods when I was over at Seven Sisters this morning, and grabbed a few frames as one flew across the fields in its unmistakeable bobbing flight pattern. The background makes all the difference to this kind of distant-bird-flying image. 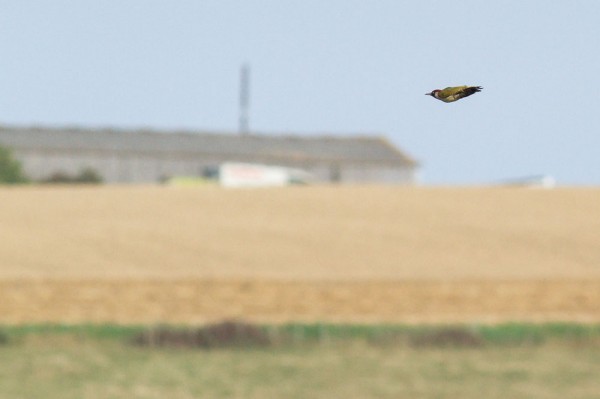