This is the slightly overdue second part of my New Year’s Eve blog, and the promised bird life.

The tide was out which is always helpful for spotting the more unusual visitors as the seaweed-laden rocks are excellent feeding grounds. Oystercatchers are among the more regular visitors, though mussels rather than oysters are the mainstay of their diet. 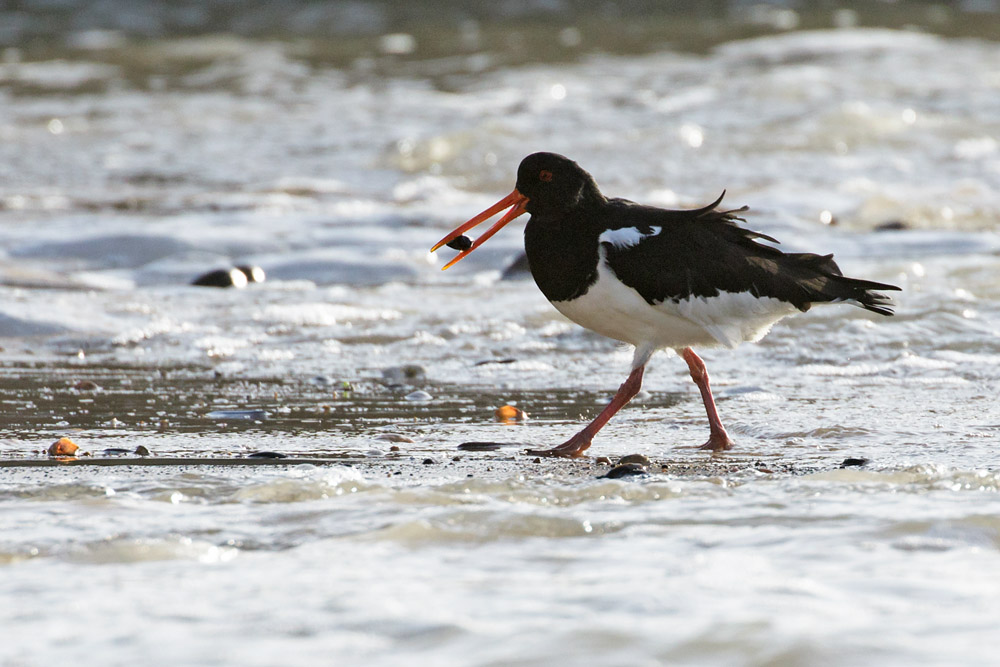 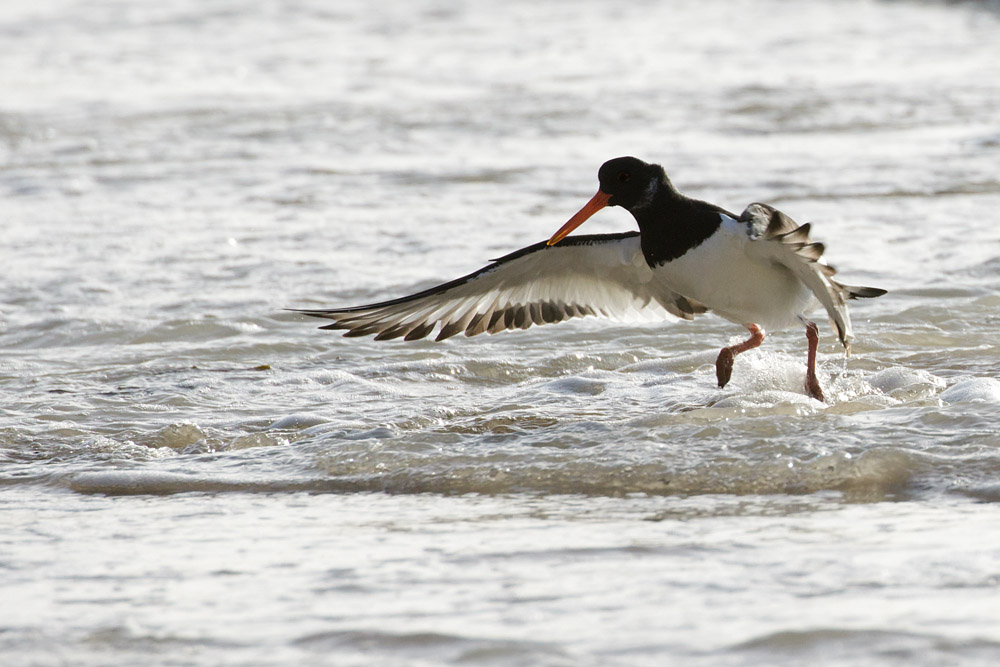 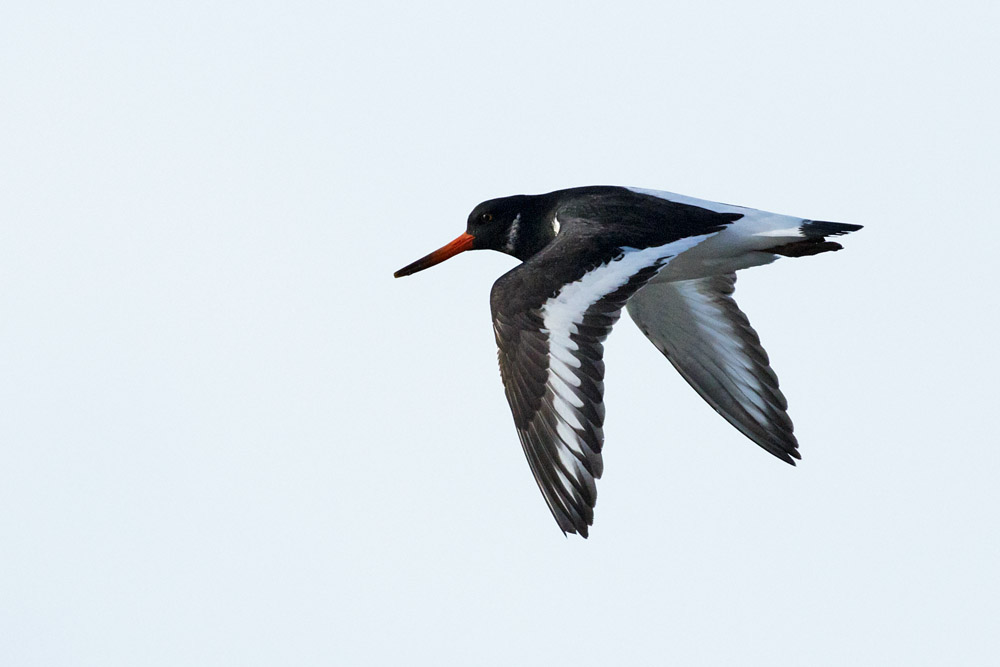 Another fairly common visitor is the little egret. Several were feeding on the rocks, though they remain quite shy and prone to hop along the coast if disturbed. 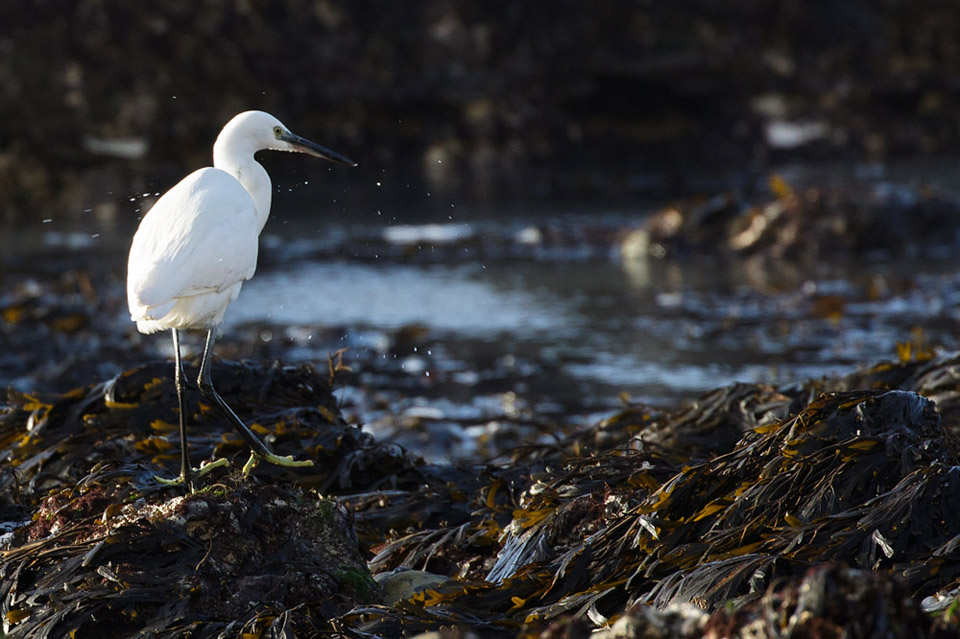 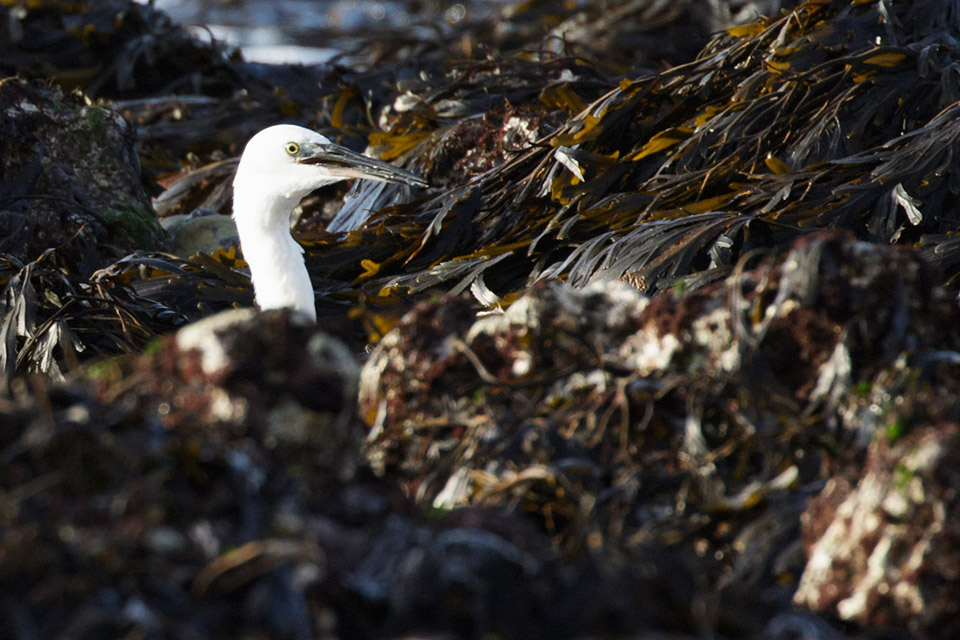 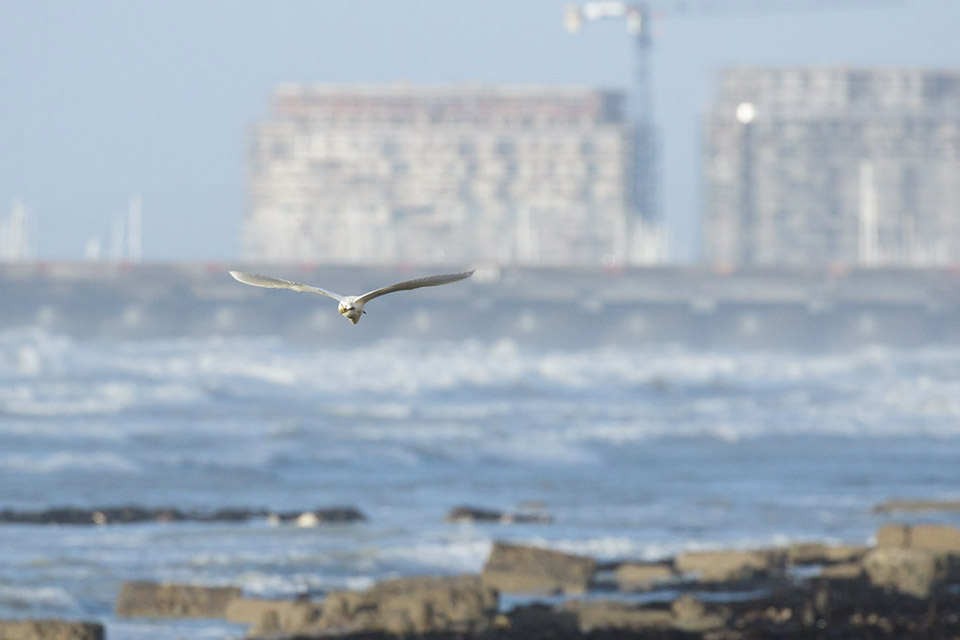 Little egret with Brighton in the background

Much harder to spot than the pure white egret are the much smaller ringed plovers. When in among the rocks and pebbles they all but disappear from view (perfect camouflage), but even they can’t remain hidden from view once they take to the air. 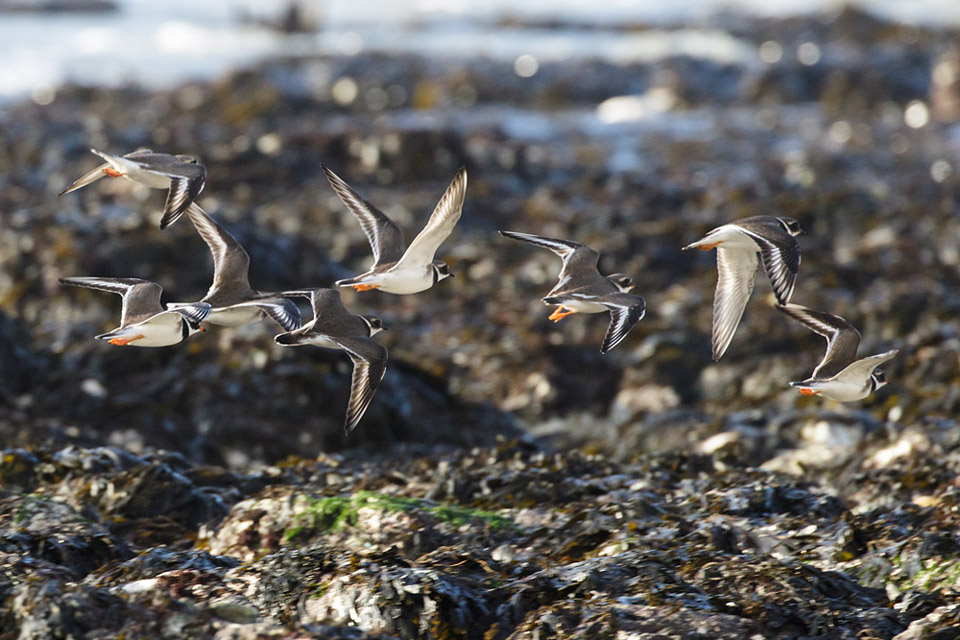 Finally, on many levels the pick of the bunch, a curlew. These large birds are very occasional visitors to the Rottingdean coast but make excellent use of their long curved bill to search out the tastiest food. 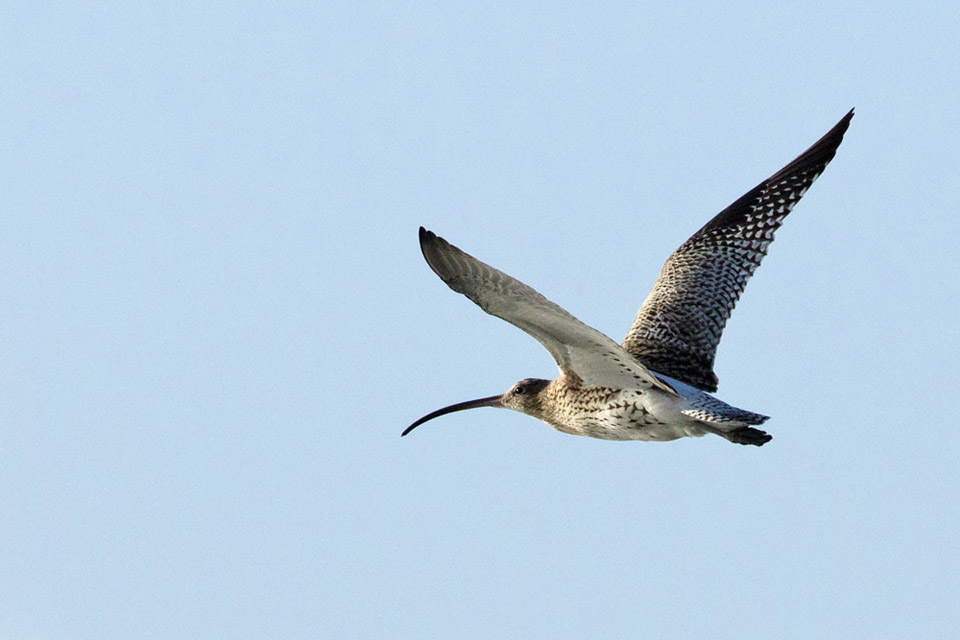 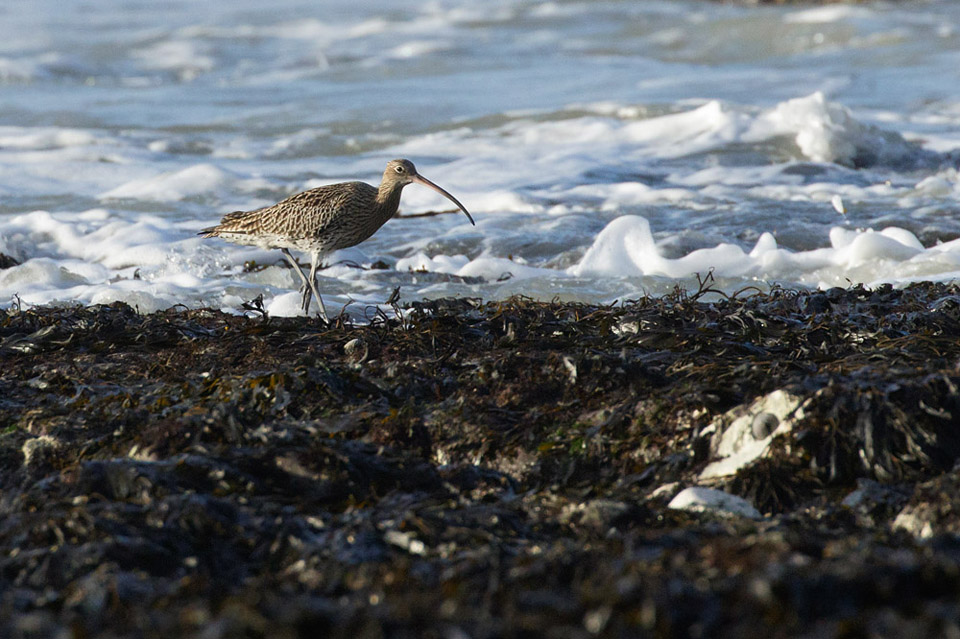 After yesterday’s outstanding encounter with a great white egret, today was – as expected – somewhat calmer. We headed out to Seven Sisters Country Park and did the walk down to Cuckmere Haven. It’s a beautiful spot, but can get a little crowded at times which means that it isn’t always ideal for wildlife watching. The views are stunning though. 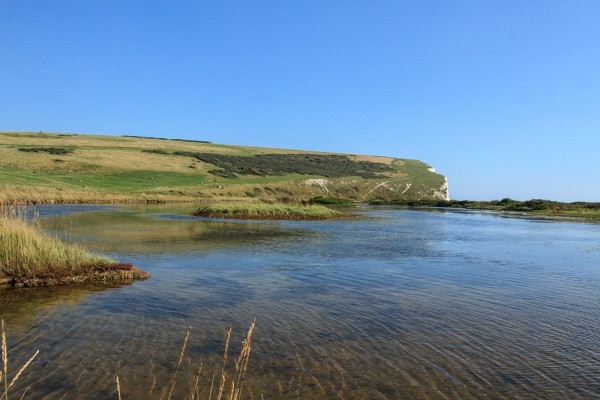 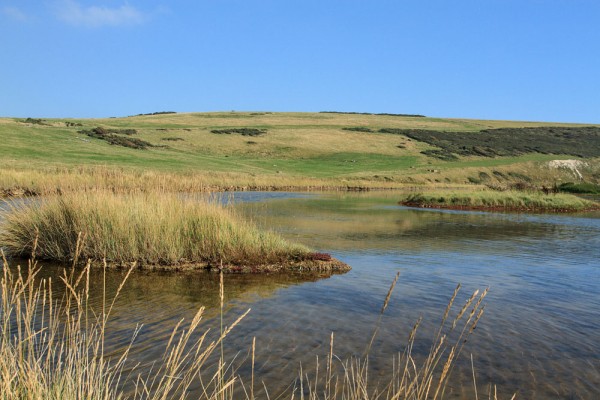 And as it turned out, the wildlife was quite good too. A couple of herons were among the early sightings. Nothing spectacular, but nice to see. The first good sighting was all too fleeting. A smallish bird zipped over, heading out to the cliffs. I was talking to another birder at the time, and the consensus was that it is a merlin, our smallest bird of prey. If we’re correct that’s a first for me. The photo is dire. It came in over my shoulder so I could only catch it heading away from the camera. 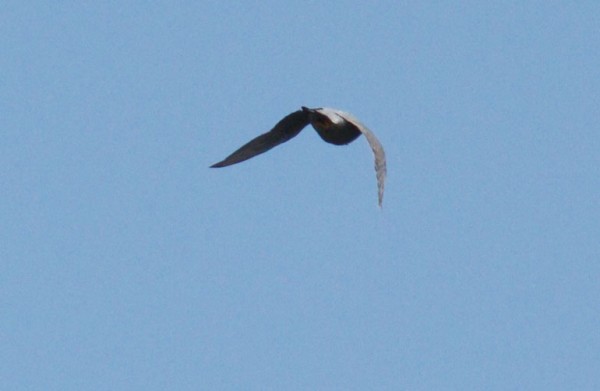 I could be wrong about the i.d., but the conversation quickly turned to that other merlin (no, not the wizard), the engine of the Spitfire. And remarkably on cue, one flew over just to prove the point. It’s a 2-seater (converted apparently for training purposes) and there’s precious little data about it on the web, though it seems have been part of the Dutch airforce at one time. Its index is SM520. 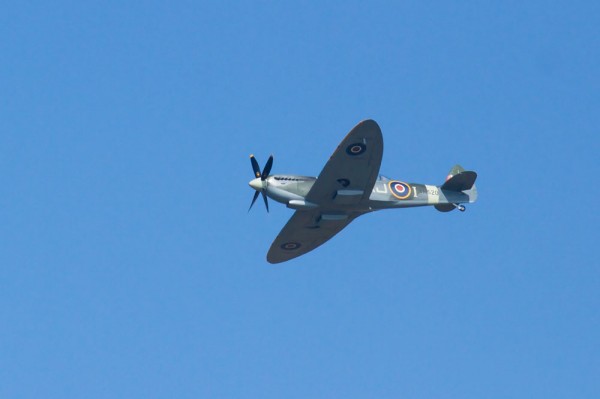 We have several airshows in the region at this time of year, so no doubt it’s been taking part in one or other of those.

There were two other notable sightings, the first coming at the far end of the bird of prey scale. Having seen the smallest (I think), this is one of the largest: an osprey. 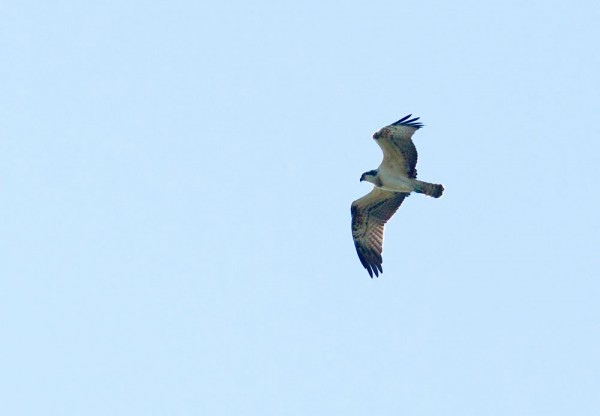 The second notable bird was a curlew. While not wholly unexpected, they are relatively uncommon and always a pleasure to see. 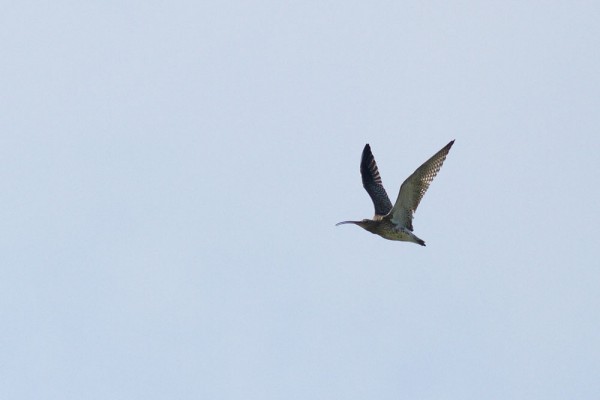 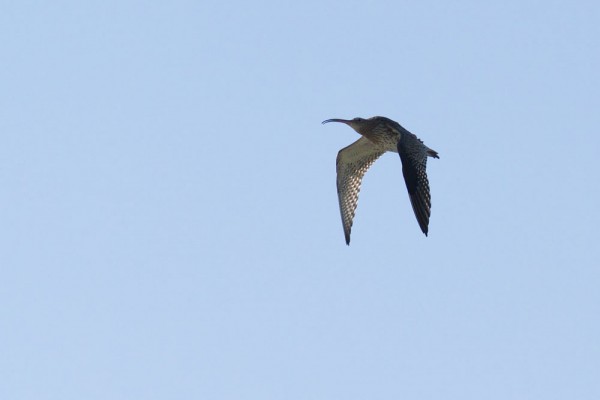 To close, a video clip of the egret from yesterday.

Camera note: all wildlife photos taken with the Canon 7D and EF 400mm f/5.6L USM lens. The two landscapes were with the EF17-40mm f/4L USM lens.

Birds in the Gloom, plus a night visitor

After the beautiful sunshine yesterday morning, today was more typical. Mist, a faint drizzle, and an overwhelming gloom was the order of the day. All of which means that I photographed very little, though there are a couple of images from early this morning that, despite the poor quality, have sufficient interest (to me at least) to be be included here.

The first is a little egret. Nothing too unusual about that, but I liked the juxtaposition with the mini forest of road traffic signs behind. 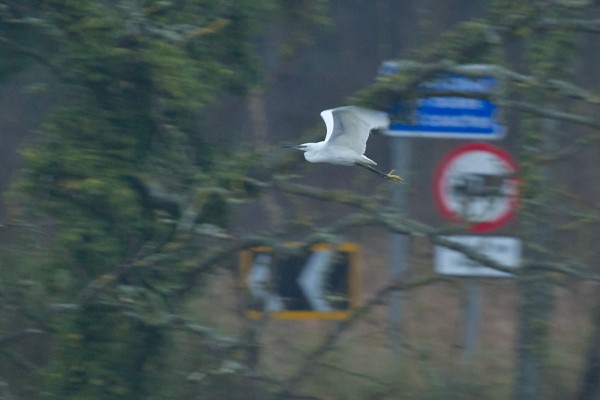 The other bird from this morning was one of several I saw of this species. It’s a curlew. There were four or five that flew overhead, in the few minutes I was watching. The photo is poor, but the best I could manage in the conditions. 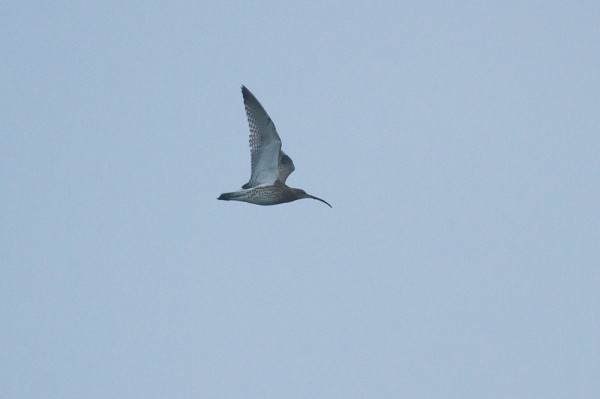 The conditions were a little easier this evening when Pretty put in a welcome appearance. It’s a few days since I’ve seen her, but it she is still limping on her hind leg. It doesn’t look serious and I’m sure she’ll be back to her usual self in a few days. 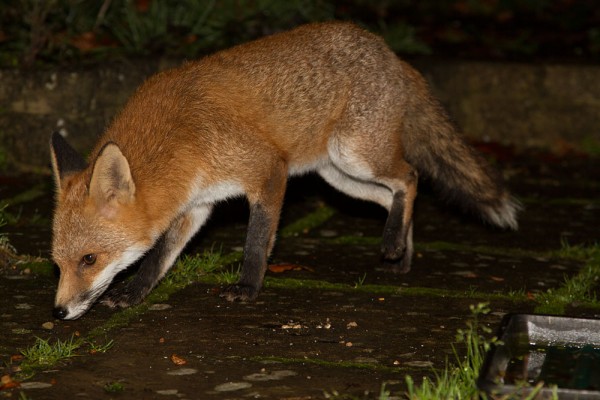