New Ducks on the Pond + a common sandpiper

Life at Falmer Pond is generally fairly predictable. The gulls and geese come and go according to the season, the ducks stay around for the year, and the heron pops in every now and then. Once in a while though new ducks appear. Last year we had a couple of Muscovy ducks. The most recent additions are two near-white ducks which I saw for the first time yesterday (the photos are from today). 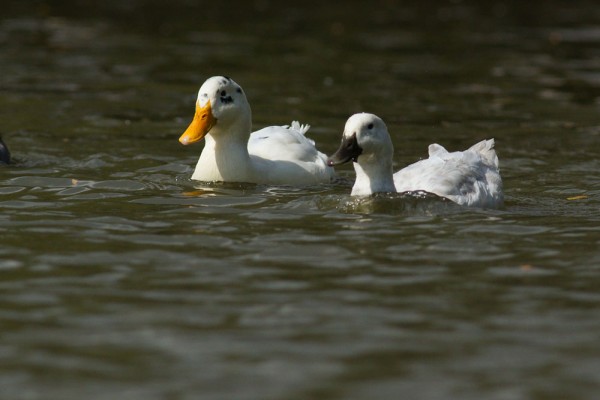 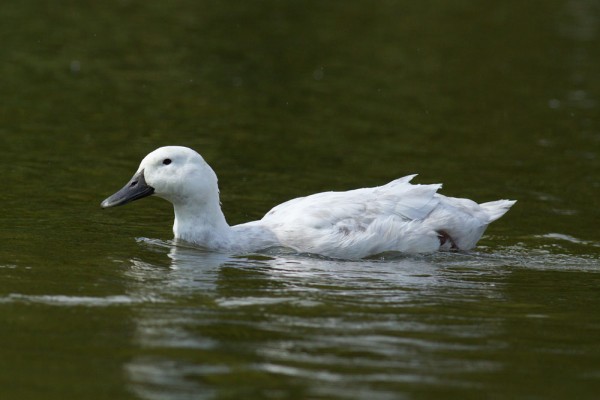 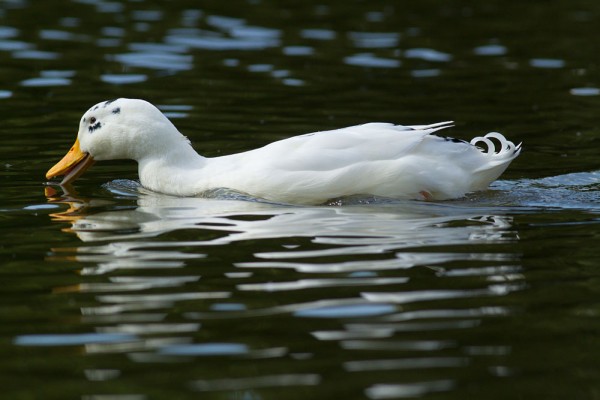 I expect them to be around for a while and they seem to be integrating well. Whether they arrived under their own steam, or were released, is another matter entirely.

One of the less frequent visitors is also one of our smallest wading birds, the common sandpiper. They tend to be shy (even of other birds), and I spotted this one picking its way through a shaded corner of the pond. 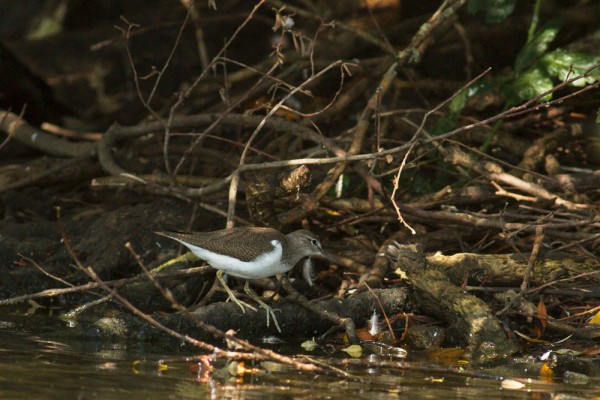 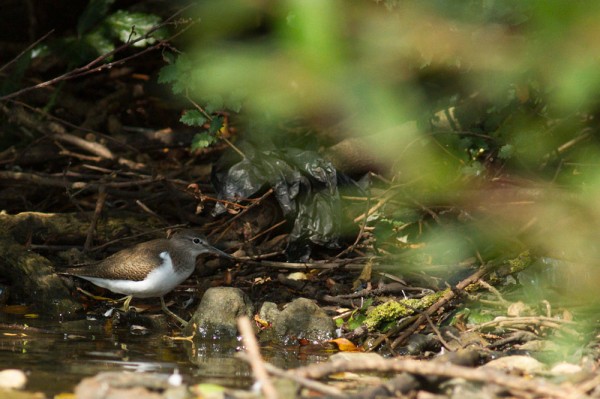 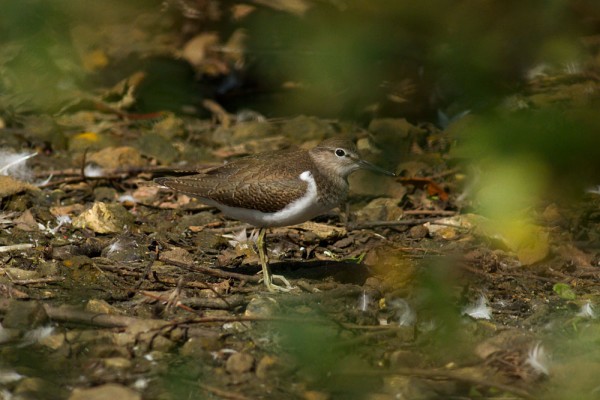 The last photo for today is a rather fine sparrowhawk, which was circling the car park when I arrived back at work after lunch. 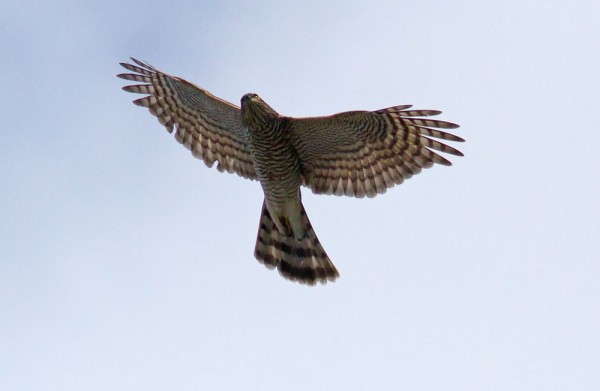 Just a short sequence from yesterday. I was out in the garden watching the skies when the squawking of the local herring gulls alerted me to this sparrowhawk flying overhead. 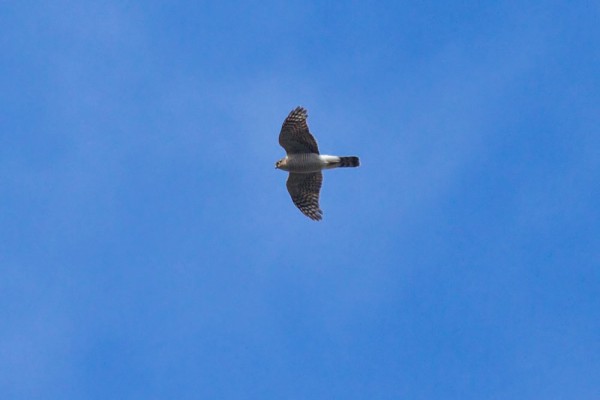 Most of the gulls were keeping their distance and just being noisy about the passing intruder over their patch. One gull, however, took matters into its own hands (or wings) and commenced on a solo mobbing. These are hefty crops as the action was a considerable distance away. 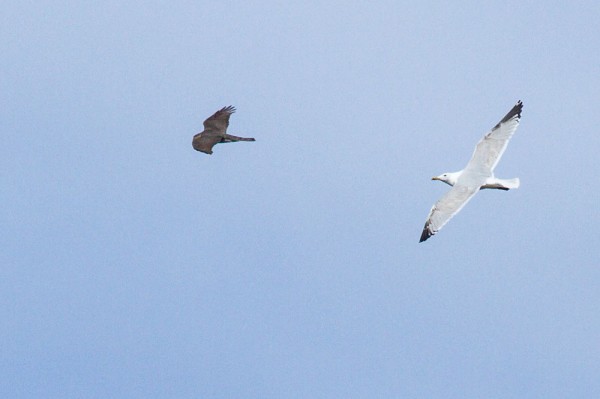 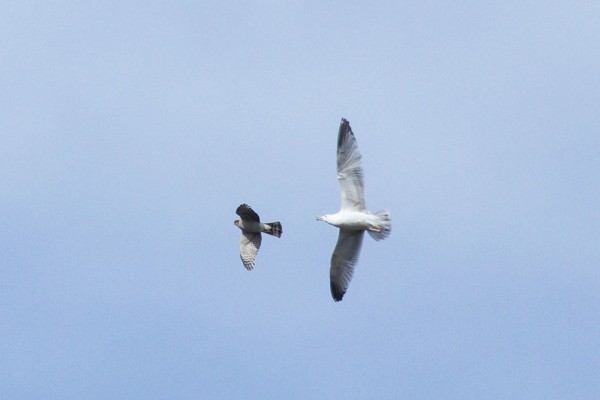 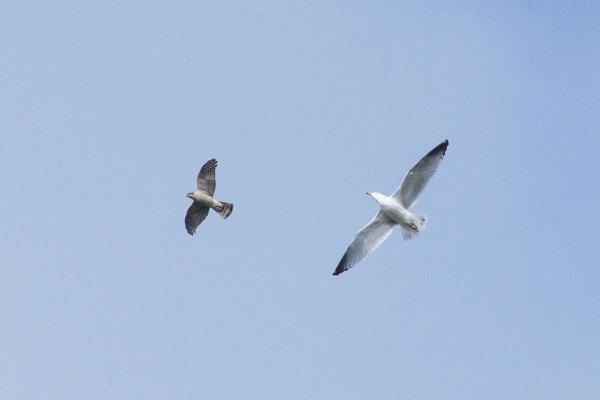 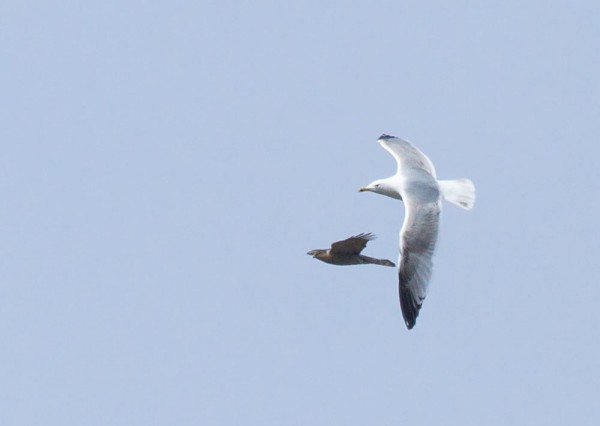 The sparrowhawk eventually got fed up with the close attentions of the larger bird and dove down across the valley, easily outpacing the gull which was content to return to the main flock.

The unexpected dry spell allowed us the chance to do some tidying up in the garden. It was sunny and there’s always something to see overhead, so I’m certainly not about to complain. The gulls are a good alarm system when I’m gardening. I don’t actually have to watch the sky, just keep an ear open for sudden silences (always worth checking out), or a near exponential increase in squawking. Both say: Raptor Alert!

Here’s the first visitor of the day, a rather fine looking buzzard that flew over late morning. 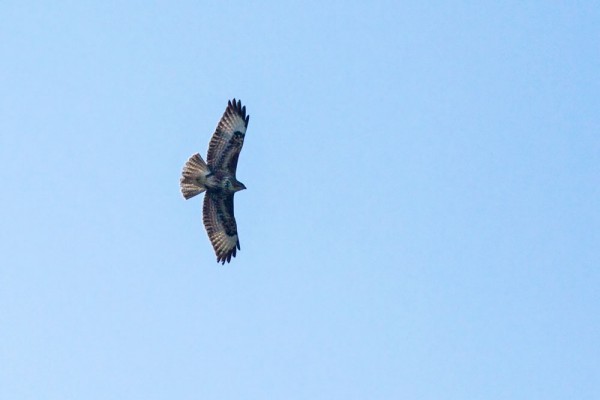 I missed a sparrowhawk soon after that one, but they tend to come back and I was able to get this photo a little later in the day. 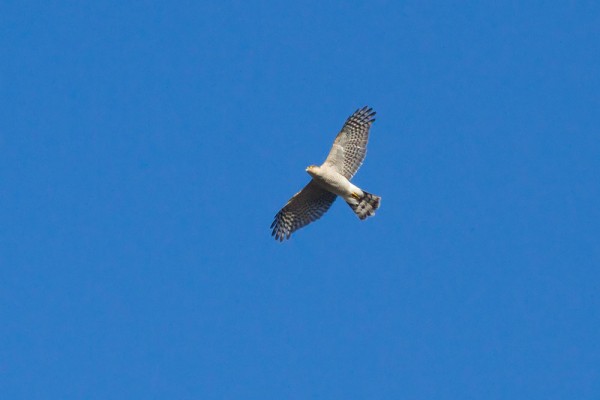 As well as gulls and birds of prey, it can be worth watching the corvids. Jackdaws chatter overhead; and the crows have their own noisy way of making their presence known, especially if they’re not happy. I spotted a small group crows in fairly frantic flight. It appeared that they were chasing an unwelcome crow out of their territory. This is a short sequence of what happened when one of the local crows caught up with the interloper. 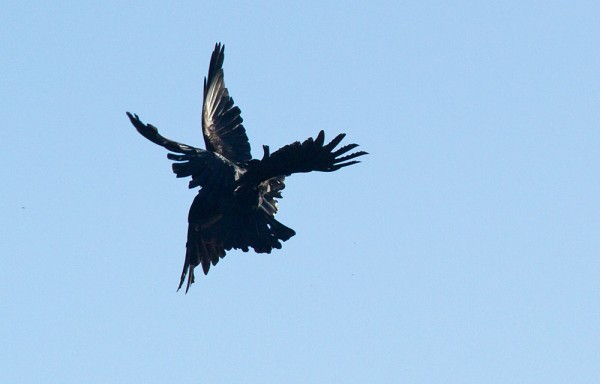 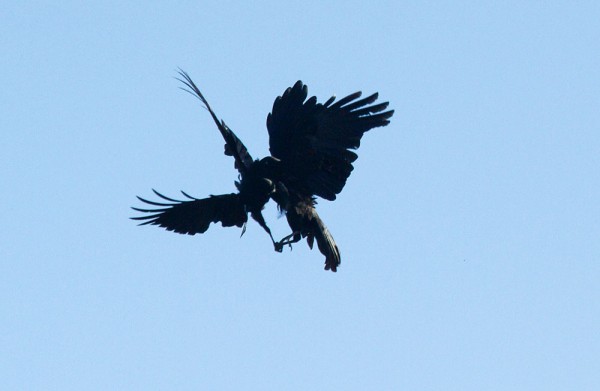 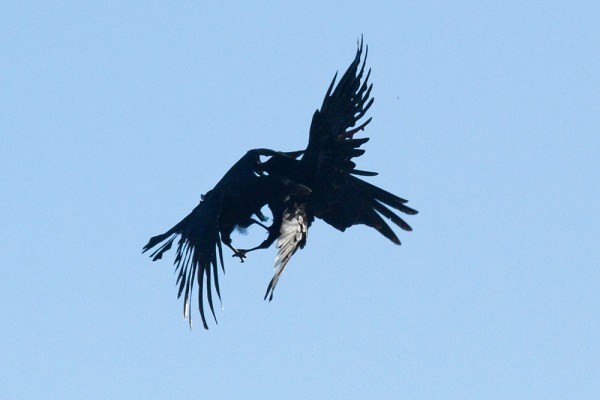 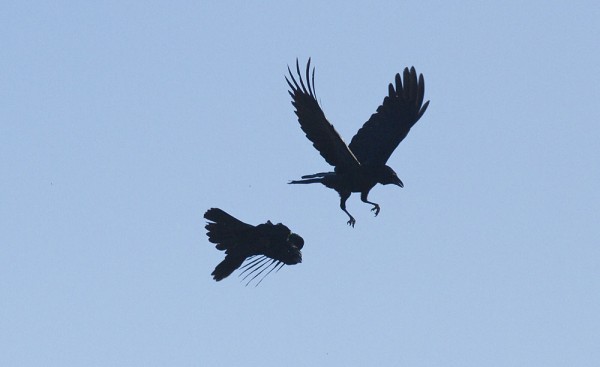 The shots were taken from some distance and are heavily cropped, but it was interesting to see them in mid-air combat. The birds separate in the final shot and I watched as the lead bird was chased away over the valley. The several other crows in attendance (but out of shot) circled back to nearby trees.

The final sequence is of a buzzard. It wasn’t being mobbed as such, but carefully escorted away from the area by a small squadron of herring gulls. They mainly kept their distance, but one would occasionally dart closer to remind the buzzard of their presence. The buzzard itself is interesting as it has lost a number of primary feathers. Its flight seemed unaffected, and the feathers will re-grow. 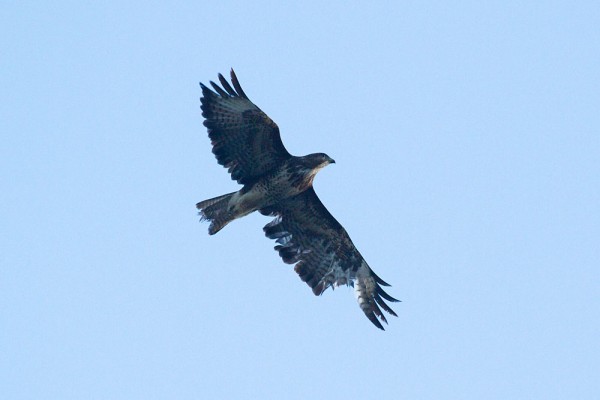 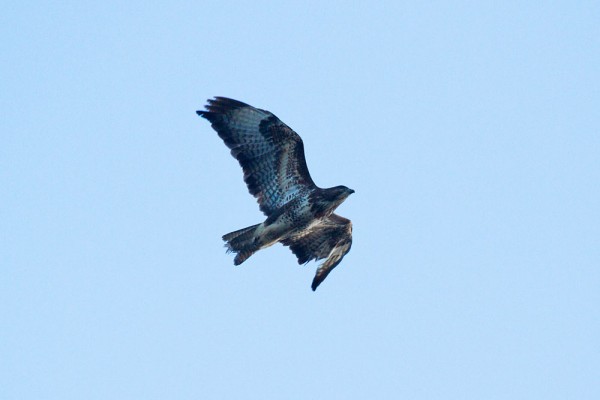 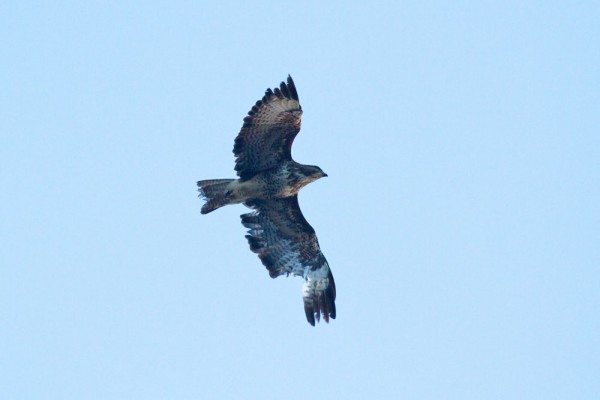 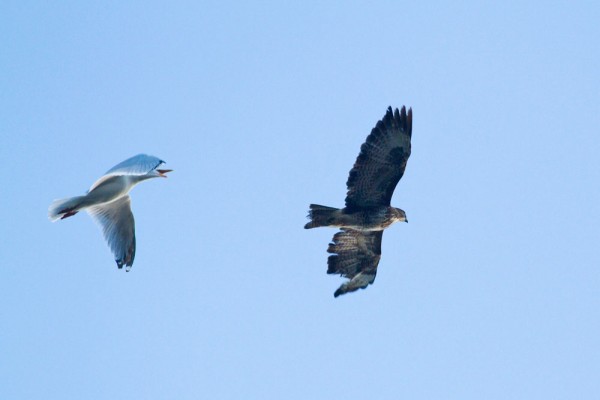